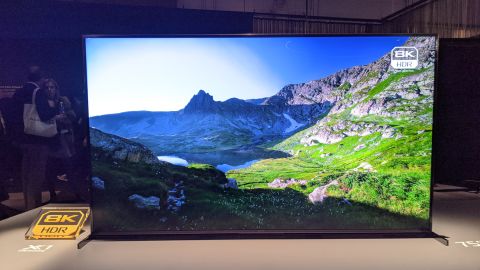 The 75in Sony ZH8 8K TV is arguably one of Sony’s most important TVs of the last few years. Launched at CES 2020, it’s not the first 8K that Sony has made and it certainly won’t be the last but, to date, it’s the company’s smallest and it might just be the first one that customers buy in any significant numbers.

As ever, the pricing hasn’t been fixed yet but there is a sense from Sony that the 75in ZH8 will be somewhere in upper realms of affordable, at least compared to 2019’s 85in and 95in ZG9 Master Series 8K TVs which felt more like showpieces with their entry-level tag of £13,999.

We don’t know just how affordable the ZH8 will be but, with a smaller panel and a slight drop down in backlighting tech, there’s every reason to have fingers crossed.

The Sony ZH8 feels like one of the company’s best TV designs for a while, harking back to its monolithic TVs of 10 years ago. It’s named Immersive Edge and the idea is to push the feet all the way out to the sides to stop them reflecting in the screen. It also means that the panel can be almost flush with the surface it’s sitting on.

If you want to fit a soundbar underneath, though, or you only have a small cabinet to stand it on, you can change the orientation of those same feet and pop them into slots closer to the centre of the TV to raise it up higher. Combined with the uniform, brushed metal finish frame, it gives an appealing sense of simplicity.

The remote control is very much the same as last year’s but with the important addition of backlighting which automatically kicks in when you pick it up in low light conditions.

Like all of Sony’s 2020 line-up, the ZH8 is based on the Android 9.0 TV OS but with a few tweaks of Sony’s own including a handy quick menu which bundles in fast access to your favourite streaming services as well as your HDMI inputs.

Connectivity-wise, it’s both Chromecast and AirPlay 2-enabled which means you should be able to stream media direct from whatever tablets and mobiles you happen to own without too much trouble. There’s also a built-in microphone for the Google Assistant search which seemed to work very well at pulling up Netflix programmes in our short demo. It’s an official Works with Alexa TV too.

You’ll notice that it's called the Sony ZH8 rather than the ZH9. That’s because it’s not quite as premium as Sony’s 2019 8K TV the ZG9 in terms of panel technology.

Instead of Backlight Master Drive, Sony is using its Full Array LED label to describe the ZH8's backlighting credentials. In real terms, that means fewer LEDs and few local dimming zones too but, if that amounts to an affordable 8K TV, then it feels like a sensible compromise.

Otherwise, there’s little difference between the two 8K series. The ZH8 still gets Sony’s top-of-the-line X1 Ultimate processor, the X-Wide Angle viewing angle abilities and X-Motion Clarity motion processing technology too. In terms of HDR, there’s still no support for HDR10+ and no current plans to in the future either. Watching a few short scenes we get some idea of what this all adds up to in picture performance.

Starting with the early sections of The Revenant, the local dimming control looks very good. While it’s difficult to get a handle on absolute black levels and comparative dark details without a good degree of calibration, what’s impressive is the consistency of lighting across the dark areas of the picture. There’s plenty of variation within the blacks and no noticeable banding.

Another scene from Gravity gives another promising sign as we see Sandra Bullock spinning through space against a well rendered blanket of stars. There’s little haloing or fuzziness to the pinpricks of light, allowing the black void of space to look deep, consistent and rich.

Moving onto Sully and we see good signs of white detail too and enough subtly of control for some effective shading. The neon adverts of Times Square look lifelike. Each of their fluorescent tubes show real depth and dimension. It makes for a very pleasing image and we look forward to pushing this set harder when it comes to a full review.

In many ways, it’s the audio demos that of the ZH8 that are more impressive. This is where we see improvements on the ZG9 because Sony has managed to fit this LCD TV with the Sound-from-Picture technology which it developed for its OLEDs in 2019. This comes in the form of a new frame tweeter to support the more traditional drive units fitted to the bottom corners of the set.

Actuators midway up on either side of the frame cause the metal frame to resonate and produce high frequency audio and the result is that the sound feels like it’s raised up and more integrated into what you’re seeing on the screen. It also means that it doesn’t have to travel around from the back of the screen to get to the viewer and that makes it feel noticeably clearer in the demos.

Sony has also redesigned its full-range speakers too. The cabinets are slightly larger but it’s the shape of the cones themselves which seem more important. They offer a bigger moving surface area and are said to reduce unwanted resonance.

There’s a lovely sense of dynamism as Jenny Lind blasts out Never Enough in our demo of The Greatest Showman. It’s a spine-tingling moment in the film that’s not one bit muffled or muted by this TV. The soundstage feels broad and tall and easily spreads to our viewing position.

Moving onto a clip of Billy Joel live in concert, there’s a good sense of low level dynamics with a real feel of gravel to his voice. There’s also a reasonable feeling of depth to the sound although we’d be interested to see how that translates to the big hits of a movie soundtrack.

Like other manufacturers, Sony has included an audio calibration mode it calls Ambient Optimization. A microphone on the remote picks up the acoustics of your room and adjusts internal equalizers to get the sound it feels is best. Another interesting feature is that the ZH8’s can be set to act as a centre speaker in a home cinema arrangement.

While we would always recommend an external sound solution for a TV, our initial impressions of the ZH8 are of some possibly class-leading TV sound for a set without an soundbar. We look forward to putting it through its paces properly.

There’s a lot to like about the 75in Sony ZH8 and, hopefully, its 85in sibling too. It will likely come down to pricing as to how competitive and alluring it is to would-be 8K customers.

Content, of course, is still an issue but from what we’ve seen and heard so far of upscaled 4K, there’s a lot to feel positive about here.