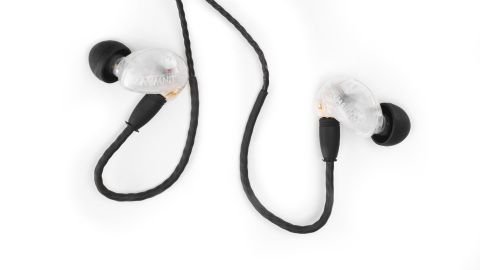 These Brainwavz in-ears are full of innovative engineering, but unfortunately their presentation of music is wholly confusing

No that isn’t a misprint, the company name is spelled Brainwavz. That is at least in keeping with this decade-old manufacturer’s apparent insistence on doing things differently.

The Brainwavz B400 headphones (£137/$175) are a fine example of this, in that they use a four-driver system, with each focusing on a specific frequency range. Much of the rest of these in-ears has been 3D printed – allowing the engineers to experiment with the creation of what Brainwavz describes as ‘a unique system that lets the balanced armatures perform above and beyond expectations’. This means ‘an ergonomic design unattainable by traditional manufacturing methods’, it says.

This inventiveness is not at the expense of practicality; Brainwavz has also protected the B400s’ lifespan by using detachable MMCX cables, meaning something would have to go wrong with the buds themselves for you to need to buy another pair.

But that shouldn’t be an issue – these feel like a three-figure pair of in-ears. The 3D printing is a canny idea, with the one-piece mould adding a sense of sturdiness as much as it looks the part.

The B400s are well engineered too. They come with five spare pairs of rubber buds and one memory foam pair, and the hooks that run around the backs of your ears are light and comfortable as much as they are practical.

However, being this generous about the sound these earphones make is a far more arduous task.

They aren’t totally without merit, of course. There is a decent level of detail to the midrange, which is the area of frequency where the B400s feel most comfortable. While we wouldn’t go as far as saying the sound there is rich, at least it doesn’t feel overly lightweight.

But for anyone who enjoys happy endings or glowing reviews, it might be best to put this one down now. Though the midrange sets a respectable, if not mightily high, bar for the rest of the B400s’ presentation, the remainder of its four drivers still fail to meet it.

The lack of weight is particularly disappointing. The bass feels a little hollow, with its edges ill-defined, and it does little to punch through the mix or give tracks much presence. Treble, meanwhile, lacks any richness or bite – not overly rolled off, but too coy to really sing. It feels more like a sketch of the music rather than a finished piece.

But mediocre levels of detail and less than expert balance, if generally passable, are things we can largely forgive if the music is presented with verve and enthusiasm. The B400s, unfortunately, do little to redeem themselves elsewhere.

There are those who believe, that with a certain amount of application, you could teach monkeys to write Shakespeare. Brainwavz here at least suggests someone has helped them form a band. Rhythmically, for a pair of in-ears costing over £100, the B400s are frankly quite disappointing.

It’s a matter of timing and organisation, neither of which appear to unduly concern the B400s. Percussionists playing simple 4/4 beats sound like they have spent the afternoon in the pub, while anything more complex sounds amateurish. Each instrument seems to take its own route, staggering towards the close of each track, but without any enthusiasm about the destination.

These Brainwavz are not devoid of all dynamic expression, there are parts of a piece that are louder than others, but overall, it sounds staid. We don’t expect a show stopping live performance from in-ears at this sort of price, but we would welcome it if the musicians feigned a little interest. The whole performance is just all a bit bewildering.

Brainwavz evidently has its admirers, and the company proudly displays plenty of favourable comments on its website, but the B400s feel more like a venture in engineering than being overly concerned with sonic prowess.

That’s not to say the innovation displayed in these in-ears’ design and manufacture is without merit, we’re just struggling to match other people’s superlatives when it comes to actually putting them in your ears.