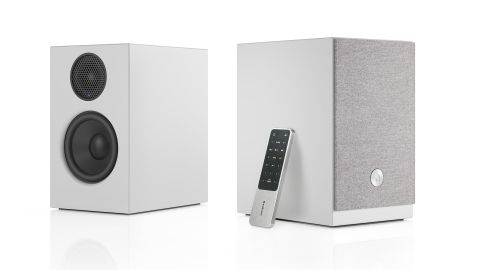 These Audio Pros have all the right ideas, but there's just not enough in the audio performance for a hearty recommendation

The Audio Pro A26 powered speakers are the first standmounters the Swedish company has added to its popular multi-room range. Alongside the A36 floorstanders released at the same time, they break new ground as the first dedicated stereo pair in the series.

Armed with an impressive array of connectivity, including an HDMI ARC input to turn them into speakers for TV sound, the A26s are positioned as an all-round sound system for the living room.

They are fitted with the latest low latency Bluetooth codec, Spotify Connect, the Audio Pro app featuring all the major music services and networked streaming abilities. On paper, at least, the A26s have more or less everything you could wish for.

The A26s are a design departure from the Addon range, which has featured the same, koala-like face for years. The new aesthetic is not terribly exciting, though.

The charcoal covers feature a metal Audio Pro logo but, apart from that, there are only smooth surfaces. Remove their grilles and our black review sample looks rather plain on the eye, though the alternative, white finish has a more classily Scandinavian look.

The two drive units are also black. On top is the 25mm textile dome tweeter with the 11.4cm woofer on the bottom. Inside one of the rear-ported boxes is a pair of 75W Class D amplifiers – one drives the master speaker and the other is for its passive partner. The two speakers are connected by an included speaker cable.

Audio Pro makes a set of dedicated wall brackets that costs a fairly reasonable £29 per pair. The A26s work best when placed close to the wall, so these brackets should help the speakers deliver something approaching their optimum sound.

You can leverage all the wireless potential of the A26s through the Audio Pro Control app, which integrates the likes of Tidal, iHeartRadio, Napster, Qobuz and Deezer in one place. You can play any locally stored audio files, including podcasts, through the app as well. The A26 speakers also work with Spotify Connect.

The Audio Pro app itself is a little rudimentary compared to some, but also fairly well thought out. It's responsive and not over-complicated, which is important if you’re using the A26 as part of a larger Audio Pro multi-room set-up.

There is a straightforward EQ control in the form of bass and treble sliders, although these are generally best left flat. There’s also an audio virtualiser mode to help create a soundstage especially for movie-watching and a night mode to enhance dialogue clarity while keeping the main volume and bass as low as possible.

You won’t find all of those options on the dedicated remote control, though. This pleasing aluminium zapper offers volume, input selection and playback controls, but these won’t necessarily work for every single source device. For example, it doesn’t skip tracks when plugged into our laptop playing FLAC files through VLC.

We start with Mozart’s Violin Concerto No.3 In G Major, K.216, and get an immediate feel for the space and scale that this two-speaker solution offers. There’s an impression of openness with a soundstage that’s broad enough to deliver a strong sense of the orchestra.

The audio is still centred on where the speakers sit, but there’s enough to get a clear idea of positioning of the first violin in the foreground and the rest of the string section behind and to the right.

The dynamics are decent, if not inspirational. The sound doesn’t drop down to a deep silence but there’s a clear difference in the scale between the first violin fiddling away to the tune compared to the rest of the strings bowing out the bed of music in the background.

We play something a little faster with Radio Free Europe by R.E.M on FLAC, played hard wired to the A26s, and we’re immediately impressed with the size of the sound for such little speakers. The kick drum is like a heartbeat thumping through the track from first to last.

It’s not a long way off a room-filling performance and certainly enough to feel the bass in our bodies. However, it’s a soft-edged sound, missing the precision to convey a good sense of the pulse of the music.

There’s a reasonable tonal balance to the track. Michael Stipe’s voice is clear and there’s plenty of detail including the wangling guitar that drops in and out of the song.

Right at the top, there are plenty of sounds from the metal parts of the drum kit but they’re not sounds we particularly enjoy. The treble notes are unsophisticated and the tweeter sounds too messy. The hi-hats, the snares and the cymbals are hard to differentiate, which rather spoils the pleasure of Bill Berry’s work.

What really kills the track, though, is its lack of rhythmic drive. The A26s struggle to create a definite onset and end of notes to mete out a sharp, clear sense of purpose to every strum or percussive hit.

Combined with the less than stellar dynamic ability and soft bass, it makes for a murky and disappointing climax to the track. That becomes quite hard on the ears when listening to a whole album of songs with attack.

We take it down a gear with Respect by Aretha Franklin and the speakers respond well to this less complicated recording. The track is simple and staccato enough to hold a better sense of purpose. It’s enjoyable enough and there’s an even balance of the guitar with the lead and backing vocals. All the same, the feel of the song isn’t quite translated.

There’s not enough expression in the midrange for us to appreciate anything like the depth and desire of Franklin’s demands of her lover. Not even the normally dripping rich ‘oohs’ of the backing singers carry much nuance.

These Audio Pros aren’t a bad pair of wireless speakers – they are easy to set up; they can work for both your music and your TV sound; and they are capable of working in a multi-room set-up. They support just about every kind of input and you can use pretty much any music streaming service with them.

The trouble is that they just don’t sound that great. If a pair of speakers doesn’t make you excited about listening to music, they have fallen short in their primary purpose.

If you’re already heavily invested in the Audio Pro ecosystem, you might wish to try them out, but we’d advise you to spend your money elsewhere and buy something more musically talented, such as the Ruark Audio MR1 Mk2s.