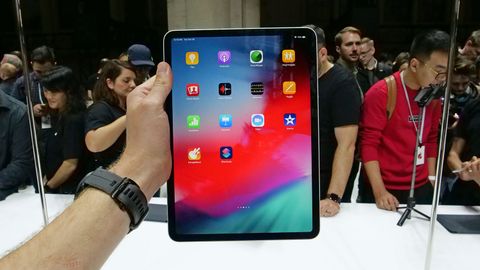 Heralding the new iPad Pro as the biggest ever update to Apple’s flagship tablet may not seem like a huge claim. After all, the product is only three years old and three models in - and we expect big improvements with every iteration.

But take a look at the specs and spend some time with the new iPad Pro and it quickly becomes clear that the claim is not only justified but almost an understatement.

Indeed, the new laptop-in-a-tablet ‘notebook’ is the upshot of more than just a few tweaks here and updates there, with significant upgrades spanning screen, speakers, design and power.

But how do they translate from paper to practice? Our colleagues at Techradar got hands on with the 11in version (there’s also a 12.9in model) at the Apple event to give us some first impressions.

Spoiler: they’re pretty positive. But then their priorities are slightly different to ours. And then there's that price...

OK, so the good news first: the iPad Pros can be pre-ordered now and in your lap on Wednesday 7th, which is when they become available.

The bad news: you don’t have long to save up for the painfully high asking price if you want to be among the early adopters.

The smaller iPad Pro we're looking at here starts at £769 but comes in a variety of configurations depending on storage size and whether you want a Wi-Fi-only version or one with a cellular connection to enable 4G data access on the go.

The first thing you’d ring in a spot-the-difference is the absence of a home button. Oh, yes, that's right: the home button is now gone from the tablet, as it has from the latest, greatest iPhones, and we're not mourning its loss.

Apple’s Face ID performs screen unlocking duties (look directly at the tablet, it unlocks) instead, and while testing in a crowded demo isn’t ideal, we find it works slickly in both landscape and portrait orientations. As with iPhone X, controls and sliders can be opened directly by swiping from different corners and edges of the screen.

The subheadline news: there's a USB-C charging port in place of the Lightning connection, leaving only the iPad 9.7, iPad Mini 4 and iPhones using Apple's proprietary Lightning connection. It’s not a complete shock – USB-C is the chosen port on the Macbook range, after all – but it does mean that you can no longer plug your iPhone cable directly into your iPad to charge it, which may annoy some. On the flipside, the iPad Pro can now charge your iPhone, and means easier connectivity to a vast number of accessories.

And while this 11in Pro offers more screen over last year’s 10.5in model, its 5.9mm-thick chassis is no larger for it. That’s been made possible by Apple shrinking the bezels so that they more closely resemble those on the new iPhone XR. That doesn't leave you with too little bezel to hold though - it's still a comfortable experience, even with the less-rounded corners.

Screen and sound: excellent all round

That nearly edge-to-edge, top-to-bottom Liquid Retina LCD display borrows technology from the iPhone XR, with Wide Colour support, True Tone and ProMotion picture technology. And, as you might expect, it looks superb.

Is the picture quality clearly better than that of the 10.5in model, which we called ‘simply excellent, with brilliantly judged, natural colours’? It would seem so. There's a real upgrade to the slickness of the display across all applications, most notably when it's running at 120Hz for smoother gameplay.

Apple claims that its built-in four-speaker system (which we’ve previously lauded the best in a tablet) is now smaller but, according to Apple, capable of producing louder and wider sound, thanks to a new woofer/tweeter configuration in each corner.

So loud was the demo room at Apple's event that it was tricky to even hold a conversation, but the sheer loudness of the speakers could literally be felt through the vibration from the iPad Pro. Does that mean it sounds good? Or does it mean the device needs a whole lot more in the way of damping? Perhaps it's both, but we won't know for sure until we get the device into our test rooms for its full review.

In the meantime, the volume is at least impressive, particularly given the thinness of the device.

What’s evident in any environment is that this is one of the most powerful portable devices on the planet. Apple claims the new A12X Bionic chip (which already eclipses the power from the iPhone XS we saw last month) delivers a single core and multi-core performance that is 35 per cent and 95 per cent faster than its predecessor, respectively.

While those numbers are certainly eyebrow-raising, it's hard to notice much of a change when scooting around the new iPad Pro - probably because we've had more than enough power to do that for a number of years.

But it’s with more power-hungry apps, such as games or Photoshop, or any multi-tasking, that the iPad Pro 11 puts its money where its mouth is.

When playing Pro Evolution Soccer and Assassin's Creed on the new iPad Pro, the level of graphical reproduction and the fluidity on the screen is very impressive indeed.

Creative-types will appreciate not just the extra power, but also the upgraded Apple Pencil, which not only latches to the side of the iPad magnetically (where it automatically and wirelessly charges) but also introduces a double-tap feature that, thanks to a sensor, lets the user change modes when sketching. The demo showed this off with the Notes app, whereby a couple of taps switched between the current tool and eraser.

The Smart Keyboard Folio’s upgrade is much subtler. The keystroke quality hasn't changed much at all from the iPad Pro 10.5 days. There are simply two 'ridges' on it now, allowing you to prop the tablet up in different ways depending on what you're doing. We didn't try the new iPad Pro on our lap, but at a desktop angle it worked pretty well.

The iPad Pro certainly offers the raw power, sumptuous design and smooth operation to justly prize the premium asking price out of serious, probably creatively orientated users. But for those of us who are more content-consumers than creators, the smaller, 2017-launched iPad Pro, and even the standard iPad, already deliver the goods.

At this point it's hard to call the new iPad Pro a 'must-have' device, then. But it’s probably still the best tablet/laptop hybrid there is, and for some will offer the perfect combination of performance and productivity.