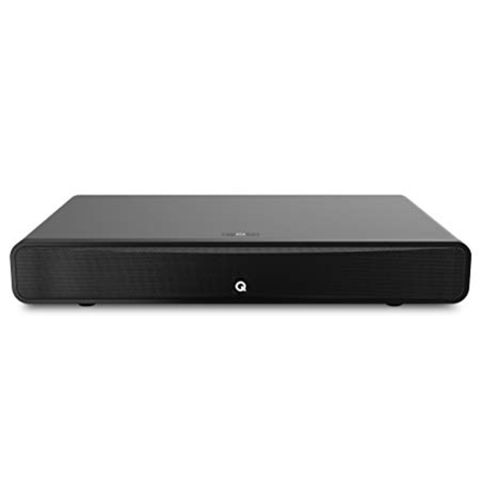 Q Acoustics can now add ‘soundbase’ to its list of successes. The M2 is fantastic value for money.

Q Acoustics seems to be in for a penny, in for a pound when it comes to boosting TV sound.

Following the success of its Award-winning Media 4 soundbar, and to a lesser extent the M3 follow-up, the British brand is making its soundbase debut with the M2. And, perhaps unsurprisingly, it follows in its siblings’ footsteps.

As we close the disc tray on a Blu-ray copy of The Neon Demon, the M2 doesn’t waste a moment before revealing its talents.

The opening credits are not only a window into Cliff Martinez’s fantastically eerily, eclectic score, but also into the Q Acoustics’ pleasing tonality and potency.

The downward-firing subwoofer digs deep to punch through the basslines, while the twin Balanced Mode Radiators fight just as hard for the credit by delivering clear, sparkling chimes and energetic synth-driven electronica.

Densely sonic and densely visual, the photoshoots of the Los Angeles models sound as lively as they look - the Q Acoustics affords body to beats and dynamism to melodies.

That clear, perky and musical character is recognisably of a piece with the company’s soundbars, so credit goes to Q Acoustics for its consistency.

When the soundtrack calms, you can hear that vocal expression is impressive through the M2. There’s genuine vindictiveness to the insults thrown around a room, and general deliberateness to the delivery of dialogue.

And while there’s no DSP trickery good enough to make you believe that the sound is coming from anywhere but the base, the M2 throws out a soundfield that even feels adequate in the company of a 65in screen.

The roar from the supercar’s engine reveals there’s sufficient power behind those drivers, while the fact you can clearly hear jangling bells off-screen beneath it just goes to highlight its powers of insight and spatial separation.

Even the subtler (albeit dramatically drawn-out) sound of the camera’s capture reaches beyond the box’s physical proportions.

Detailed, musical, punchy... these are all talents that bode well for the M2’s music playback, for those inclined to use a soundbase in that way too.

We Bluetooth a Tidal stream of The Cure’s Six Different Ways to the M2 and that aptitude is confirmed, with textured woodwinds and a jaunty piano line appearing confidently around Robert Smith’s chipper vocal.

The M2 is sturdy enough to sit comfortably underneath a fairly big screen TV. It can handle weight of up to 25kg, which is a few kilos more than most 65in LCD TVs.

A word on set-up. Behind the soundbase, there are two settings switches – one three-mode equaliser that toys with bass levels (depending on whether the M2 is under a TV or in a large or small cabinet) and a two-switch volume control.

Around the back, naturally, is also where’ll you find the connections: ARC-compatible HDMI, optical, RCA and 3.5mm inputs.

Those going through the former should be able to use their own TV remote to control the M2, too, thanks to HDMI CEC.

And that may be the best option, as the credit card-style remote that’s supplied is pretty unremarkable - not to mention easy to lose down the back of the sofa.

Still, that’s about the only criticism we can level at the Q Acoustics M2.

It may not be the only soundbase capable of improving on a telly’s inherently tinny sound – after all, the likes of Canton and Cambridge have proved themselves on multiple occasions in this price bracket over the last few years.

But it does mean the brand can confidently add ‘soundbase’ to its list of successes. And it’s about time too.