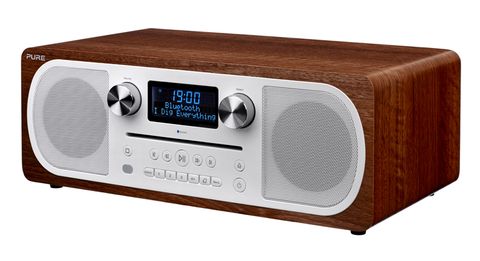 Sonically, the Pure Evoke C-D6 could be better; if you’re willing to compromise on price or space, there are better options

We were somewhat conflicted prior to testing the Pure Evoke C-D6. On one hand, we wanted to be able to recommend it; we don’t see many decent one-box systems at this price, so it would be nice if this one could fill the gap.

On the other, perhaps we don’t want a one-box system at this price. There’s a reason you can’t purchase a £250 house for example. You see, conflicted.

We certainly aren’t short on features. Nominally, the Evoke C-D6 is a combination DAB and FM radio, CD player and Bluetooth speaker. It also has an aux input and headphone jack, room enough for 20 radio presets, and a radio or CD alarm.

It’s an arsenal largely uncompromised by the price tag; for example, our current all-in-one Award winner, the £400 Ruark R2 Mk3, offers more extensive streaming features, but is without a CD drive.

The Evoke C-D6’s facial symmetry, setting to its edges a pair of 7.6cm wide-range drivers, is neat, and we’re pleased to find a substantial and well-built remote, which shouldn’t be, but has become, a rarity.

Inside, its digital amplifier is pushing a claimed 20W of power output, so we’re expecting a performance as stout as the box itself.

We begin with a CD, The National’s High Violet. There does seem to be plenty of power here; Terrible Love is allowed to open the record with its alternately plodding then racing rhythmic motion, never feeling lightweight or feeble.

It times well enough, too, to make enough sense of the top of the build, with its sometimes confusing, crashing percussion. We don’t get scalpel-like precision, but enough capability to be relatively pleased with what we hear.

A somewhat forward presentation also shines a light on Matt Berninger’s vocal, from which the Evoke C-D6 benefits. His isn’t always an easy voice to render, many of the deeper harmonics lost either because a speaker can’t reach deep enough to give it full body or because it can’t separate those tones from other instruments working in the lower frequencies.

For a product at this price, this is a decently coherent performance.

It benefits from its forward presentation mainly, however, because spaciously it is cramped. Sections with thinner arrangements – the more fragile Vanderlyle Crybaby Geeks, for example ­– aren’t so much affected, but as textures become busier, such as in Terrible Love or Bloodbuzz Ohio, space between instruments is compressed to become close to claustrophobic.

It leads to little discernable background detail, which is a shame given that when we plug in our headphones we can hear that the Evoke C-D6 is not incapable. (This in particular may be less alarming to those who listen mostly to stripped back arrangements or talk radio, of course.)

What remains our major concern, even when listening with headphones, is the quality of the treble. The general balance is fine, we don’t find the treble to stick out because there is too much, but there is coarseness, fizziness even, to the top end, to which after a while it can become difficult to listen – more so the higher the volume at which you play.

This character is unchanged as we switch between radio, Bluetooth and aux input. With a track such as Lazarus from David Bowie’s Blackstar album, for example, the snare has a relentless fizz that it’s difficult to get over, the saxophone is unconvincing, sounding unreal, and there’s a hard edge to Bowie’s vocal that we find is incongruous with enjoyable listening.

So what we have here is an all-in-one which, for its price tag, is okay. If you’re expecting the sound quality of the Ruark but on the cheap, you’re out of luck.

We’d suggest upping your budget if that is the case, or if you don’t absolutely need a one-box solution, trump both with an all-in-one system such as Denon’s Award-winning D-M40DAB.

But if £250 is a concrete ceiling to your budget, and not being one-box is a deal breaker, the Evoke C-D6 will do the job just fine, but really no better than that.