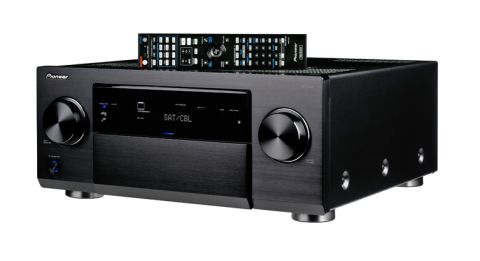 Another year, another round of AV receivers, and like clockwork Pioneer has come up with the SC-LX58. It follows last year’s SC-LX57, which was very successful.

The LX57 won our 2013 Award for £700-£1500 surround amps and is the benchmark against which we judge all similarly priced rivals. So is this heir apparent (£200 more expensive) a worthy successor, or merely a pretender?

We’re going to go with ‘worthy successor’. Pioneer has pulled out all the stops, building on everything we loved about the LX57. The LX58 is packed with features, and the sound is better than ever.

Our test disc is Captain America: The Winter Soldier on Blu-ray. It’s a veritable assault-course, full of shattered glass, crunching metal and armour-piercing bullets, topped with a caffeinated score.

This DTS-HD Master Audio 7.1 soundtrack is a workout for any system, but the Pioneer SC-LX58 breezes through it. It delivers a thoroughly immersive sound, with surround effects steered throughout the room with agility and precision.

We’ve always been impressed with Pioneer’s powers of resolution, and the detail definition here is exquisite. Everything that pings off Captain America’s shield is clearly identified, and when he throws it at somebody’s face there’s weight.

That detail extends throughout the frequency range. The low-end rumble of our hero’s motorbike is properly expressed. Explosions are surrounded by reverberations and it’s rare to find bass so deep and articulate. At the top end, it’s nicely rounded.

We had no complaints about last year’s SC-LX57 treble performance, but now it seems to lack refinement next to the LX58.

It’s clear the SC-LX58 has plenty of power under the hood. We’re very impressed with the scale of the soundstage, which is tall and wide enough to fill our largest testing room.

We enjoyed Pioneer’s weighty sound previously, but this time it feels more muscular. Gunshots command attention – they’re punchy and authoritative. It’s not all about the muscle, of course.

Despite being a powerhouse, the Pioneer is capable of musical nuance. We switch to a Blu-ray of Michael Jackson’s This Is It and the amp succeeds in highlighting the subtleties of the evolving key changes of a practice session.

The Pioneer also demonstrates a nicely balanced presentation, with a lively sense of rhythm. The bit where MJ finally gets round to doing Thriller is, frankly, thrilling.

There are plenty of surround modes with the SC-LX58 and it’s worth playing with these to suit your taste and listening environment.

But we prefer keeping it in Pure Direct mode for music, which yields the most convincing results.

Installation is an easy process. Well, it is once you’ve plugged everything in. The MCACC Pro (Multi-Channel Acoustic Calibration) makes set-up a breeze.

Hook up the bundled microphone and your system will blurt out a series of test tones so the amp to calculate the distance and size of the speakers it’s driving. This takes only a couple of minutes.

It’s worth going into the settings to fine-tune the adjustments, but we found the automatic calibration accurate. Lastly, we should mention the updated remote, which is nicely laid out and not intimidating.

But how about the rest? Take a glance at the exterior and the LX58 looks virtually identical to its predecessor. The design isn’t going to turn heads.

It’s a heavy black or silver box, and built like a tank – mostly metal, with a flap at the front. It’s well made: buttons are nice, the dials satisfying.

And underneath, the LX58 is a 9.2-channel AV receiver with Class D amplification. It packs a powerful 190W-per-channel into 6ohms (claimed), and has an extensive list of connections.

There are eight HDMI 2.0 inputs and three outputs; 3D playback is supported, as is 4K 60p passthrough and upscaling.

There is also an impressive array of analogue connections, including a pair of dedicated subwoofer outputs featuring independent calibration.

Digital connections include coaxial and optical inputs (two each). There are also two USB ports – one for powering products, the other for USB drives and Apple devices.

As for networking, there’s an ethernet socket for wired internet, and there’s a wireless LAN adapter in the box. Finally, the SC-LX58 has built-in aptX Bluetooth (and Apple owners will be pleased to find AirPlay compatibility, which can stream iTunes libraries).

You also have use of internet radio with vTuner, plus Spotify Connect and HTC Connect. DLNA means the amp can play content from compatible network devices.

Over a network or via USB, the amp can handle quite a few formats: AIFF, Apple Lossless, WAV, FLAC, MP3, WMA, AAC and DSD.

Last, but not least, is support for Dolby Atmos surround-sound tech that expands on current 5.1 and 7.1 set-ups. In cinemas this means up to 64 speakers, with some in the ceiling.

For the home, Dolby’s hardware partners will produce side speakers and speaker-top modules to emulate the sensation of overhead sound.

Sadly we’ve not yet been able to test this – the amp requires a software update, expected before the year’s end. We can’t wait, but for now this is still an impressively equipped beast.

To sum up, we love the Pioneer SC-LX58. What’s not to like? Pioneer has taken last year’s champ and made it even better.

Admittedly it’s not a massive leap over the SC-LX57, whose owners shouldn’t feel the need to upgrade straight away. But if you’re making the jump from an entry-level multi-channel amp, prepare to be astonished.

This is a terrific piece of kit.