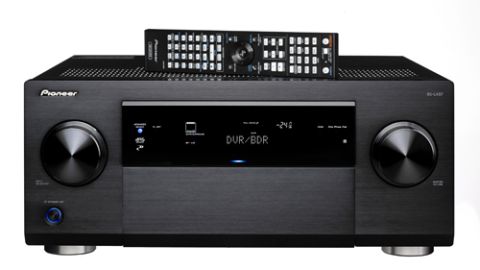 With staggering detail and low-end extension, the Pioneer SC-LX57 AV receiver is an absolute stunner.

We’ve been here before. Pioneer pulls out all the stops when it comes to its high-end AV receivers. While its budget amplifiers may not reach the same heights as rivals Sony and Yamaha, once the price hits £1000 and above it’s usually Pioneer’s show.

We kick things off with the Blu-ray of Star Trek Into Darkness, and we’re blown away by the layers of detail and dynamic subtlety that the SC-LX57 is able to reveal.

The film has a thunderous Dolby TrueHD 7.1 soundtrack, and the Pioneer steers through it with a power and confidence that’s truly impressive. While not overwhelmingly huge, the sense of scale is immersive and the surround effects are steered across all speakers with startling accuracy.

If the trade off for an expansive surround field is exquisite detail definition, we’ll happily take it.

Special mention has to go to the stunning extension into the lower frequencies. It’s rare to find bass that goes quite so deep with so much detail to it.

You can hear the reverberations surrounding the explosions rather than just the peak, and feel rather than hear the hum of The Enterprise’s engines rumbling away underneath all the chaos and clutter of spaceship’s interior.

There’s a great sense of movement, too. The Pioneer SC-LX57 is easily able to convey the shift between small, intimate rooms to the huge vastness of outer space. The silence accompanying the scene when Kirk and Khan space jump is intense, while phaser stuns are sharp and punctuating.

We’re used to hearing a slight leanness and brightness in Pioneer’s AV receivers, but the SC-LX57 bucks that trend. Give it half an hour’s warming up before you settle down for a serious listen, and you’ll notice a huge difference. The sound becomes nicely balanced and confident, shedding the slight restraint that’s apparent on initial switch-on.

Having said that, we’d still be wary of partnering the SC-LX57 with any bright-sounding equipment. A refined package such as the KEF R100 5.1, with its powerful scale and dynamics, would suit the Pioneer beautifully.

As ever, there’s a list of surround sound modes to play with, but we prefer keeping it in Pure Direct mode for the most accurate results. The SC-LX57 is THX Select2 Plus certified, aiming to deliver an intact soundtrack even when played at lower volumes.

The THX mode is worth trying if you want to keep the noise down – it keeps dialogue clear and direct without compromising the energy of the soundtrack too much.

The Pioneer’s balanced presentation and detail definition come through brilliantly when playing music. John Legend’s soulful vocals sound graceful and intimate in the Live At The House Of Blues concert Blu-ray, and there’s a lively sense of rhythm that will get your foot tapping.

As with Pioneer’s more budget VSX-923 receiver, there’s a host of music streaming features: AirPlay, DLNA, vTuner and HTC Connect will keep most streaming fans happy. They’re all quick and easy to connect to, especially if you use the iControlAV2013 app when streaming digital tunes from smartphone or tablet.

Stereo sound is admirable, too. Alt-J’s Tesselate glides along with fluid dynamics and snappy, precise timing, while David Bowie’s tender vocals come across beautifully on Sorrow.

If you have songs stored on a NAS device, use it with the Pioneer – DLNA streaming sounds strong and vibrant, whereas songs streamed via AirPlay exhibit a thinner, less substantial balance.

As we publish this, it’s just been announced that Spotify’s own streaming service, Spotify Connect, will be available on Pioneer’s latest AV products, including the SC-LX57.

The integrated service means the amplifier will be playing Spotify playlists directly, with your smartphone or tablet app as the controller. A firmware update – which should be available soon -– is all you’ll need to get the new streaming feature.

Our one gripe with all the connectivity options is that there’s still no built-in Bluetooth to be found on the SC-LX57. You can get a Pioneer AS-BT200 Bluetooth adapter (around £50), but for £1200 we would hope it would be included with the receiver.

Inevitably, the specifications on the Pioneer SC-LX57 are a notch up from its predecessor. It packs a powerful 190W per channel into 6ohms (the SC-LX56 had 170W), and an exhaustive list of analogue and digital connections.

You’re unlikely to run out of HDMI connections on the SC-LX57: it has nine inputs and three outputs, all of which support 3D playback. 4K passthrough and upscaling are supported as well, while a new audio scaler can upscale CD-quality music all the way to 32-bit/192kHz resolution.

An MHL (Mobile High-definition Link) input for streaming HD content from Android is available, as are two USB ports – one for playing and charging iPods, iPads and iPhones.

But it wouldn’t do to let HDMI grab all the attention. A couple of optical and coaxial connections share space with a good array of analogue connections, FM/AM tuners, and a 6.3mm headphone port.

The SC-LX57 takes a wired connection to your home network, but a wireless LAN converter is included in the box if you don’t want an ethernet cable sticking out of your new receiver.

Through LAN and USB, most popular music formats are supported, including MP3, WAV, AAC, WMA, FLAC, AIFF and Apple Lossless. Those with high-resolution tracks will be happy to hear that the SC-LX57 can play files up to 24-bit/192kHz, as long as they’re in WAV, FLAC and AIFF formats. DSD files can also be played via the USB port.

The user interface hasn’t changed a whole lot in a while now, but it’s a simple menu that’s easy to navigate with the supplied remote control.

After a few nights’ running in to get the SC-LX57 settled, we would recommend using Pioneer’s automatic set-up to calibrate the receiver with your speaker package. The MCACC auto-calibration feels interminably long and tedious – but it’s worth it.

Our measurements came up wholly accurate, and we didn’t need to adjust any settings manually. Ten minutes of loud and repetitive test tones is well worth enduring to get optimised sound.

The supplied remote control is a standard affair, and is mostly easy to use. The volume buttons could have been placed more prominently on the long wand, though – they are set to the side and the buttons are rather small, so it’s easy to press the wrong button when changing volumes in a darkened room.

That’s where Pioneer’s excellent iControlAV2013 app comes in. It’s still the best control app we’ve used, and we found it much easier and more intuitive to use than the remote.

The slick, colourful interface consists of panels you can flick through to access surround modes and various audio settings for the receiver – you can tinker to your heart’s content.

But the volume control and input selection panels are the ones we use most. Selecting different streaming options, scrolling through music folders and radio stations is a fuss-free and quick affair.

You can also multi-task between your recently opened panels. Clever, colourful and responsive, Pioneer’s control app is as great to use as ever.

Pioneer has done it again. The SC-LX57 builds upon its predecessor’s success to deliver an even better balanced and more thrilling sound. The Pioneer has once again set the bar for rival manufacturers. It’s a truly fine achievement.