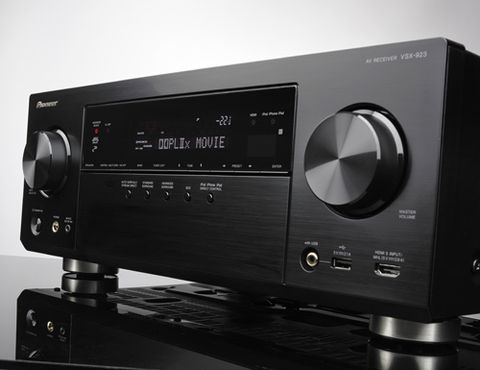 The VSX-923 might need a more oomph and detail, but its composure is admirable at this price

Pioneer has been through a rollercoaster ride when it comes to budget AV receivers. The new Pioneer VSX-923 follows last year’s VSX-922, which plunged from a four-star rating down to three, and then sprang back up to full five stars after a hefty price cut. Will the Pioneer VSX-923 have a more stable journey this year?

Let’s cut straight to the chase, literally, with the opening scenes from the Blu-ray of Bond’s latest adventure Skyfall. Pioneer’s signature sound – clear, focused and precise – is unmistakable here.

The sequence takes us through a Turkish bazaar, and the gunshots, tyre squeals and breaking objects are delivered with sparkling clarity and precision. The sound veers on the lean side, but it’s not as flat-sounding as that served up by the rival Onkyo TX-NR626.

The Pioneer comes close to sharpness at the higher frequencies, but stops short of wince-inducing levels; instead it adds excitement. The slow build-up of tension is nicely conveyed, and there’s satisfying bite to explosions and punches.

Surround effects are also placed accurately around the room in each of the seven channels on offer, although we wish the soundfield was more expansive for a fully engrossing experience.

There’s plenty of power, dynamics and detail on offer here, and the Pioneer VSX-923 is an entertaining listen on the whole. However, when put against its rivals, it’s not quite the best at this price. The Pioneer shares the Denon AVR-X2000’s tendencies for a sparkling edge, but the Denon has a touch more subtlety and is tauter and punchier to keep things more interesting.

The Yamaha RX-V675 offers far more in terms of scale and the sheer power behind its superb sound steering, and its rich dynamics make for a dramatic listen – the Pioneer sounds rather small in comparison. Despite all that it’s a far more confident sounding amplifier than the Onkyo TX-NR626, and offers more cohesion and snappier rhythms.

The VSX-923’s music performance is admirable, too, with Alt-J’s Tessellate gliding ahead with agile beats and clear vocals. It’s worth mentioning that streaming music over DLNA sounded more substantial and solid, while the same track played via AirPlay loses that sense of togetherness just a touch.

We experimented with the surround modes when playing music and movies. The 'Extended Surround' mode optimises stereo music to be played across all your speakers so you’re completely surrounded by the music – although it’s worth sticking to the stereo mode for the strongest, most detailed sound.

We’d stick with 'Pure Direct' when watching films; it doesn’t layer on any additional processing apart from the auto-calibration settings, so you get the best sound possible.

The Pioneer VSX-923 is a 7.2 channel receiver rated at 150W per channel (into 6 ohms), and has been given a spec update over the previous version.

To wit, there are eight HDMI inputs (the VSX-922 had six), and two HDMI outputs for running multiple displays. Not only do the HDMI connections support 3D and upscaling to 1080p resolution, there’s also support for future 4K ultra HD content, both for passthrough of native 4K and upscaling standard-definition content to 3840 x 2160-pixel resolution.

There’s also an extra pair of speaker terminals alongside the standard seven-channel affair. These are for connecting any front height (or width) speakers you might have – but before you get too excited, note that the VSX-923 isn’t a nine-channel system, so you’ll have to select between using the front heights or the surround back speakers. You do get two subwoofer outputs, though.

There are also analogue and digital connections (one coaxial and optical each), along with an ethernet port. The Pioneer has no built-in wi-fi or Bluetooth connectivity, although you can add Pioneer’s Bluetooth Adapter (the £48 AS-BT200) for wireless Bluetooth streaming from smartphones or tablets if so desired.

And if you want to add wi-fi functionality, the optional AS-WL300 Wi-Fi Adapter can be bought for £49.

Smartphone use is high on the list of Pioneer’s priorities, from wired playback to the excellent control app (more on that later).

On the front panel of the VSX-923, you’ll find an MHL (Mobile High-definition Link) input to stream videos and audio directly from Android smartphones. For those with Apple devices, you’ll be happy to hear that you can simply plug them into the USB port to play your music files, as well as stream them wirelessly via AirPlay.

Pioneer is the only manufacturer to be HTC Connect certified – making Android wireless streaming possible for the first time. Currently compatible with HTC’s One series, we found it worked seamlessly with the HTC One’s own music player – simply click ‘Select Player’ on phone when playing a song, and once you pick the Pioneer VSX-923’s name it should start playing over the receiver instantly.

Unlike AirPlay, it can’t stream from third party apps such as Spotify, but it’s a good feature to have if you own an HTC smartphone.

The 923 can also connect to your home network to play music stored on laptops and/or networked hard drives. You can play high-resolution audio files of up to 24-bit/192kHz in WAV, FLAC and AIFF formats over DLNA and through the USB port if your music is stored on a flash drive.

The internet features don’t end there, as the vTuner service provides you with plenty of radio stations alongside the built-in FM and AM tuners.

We’d advise a few nights’ running in before listening to the VSX-923 and using the automatic set-up to calibrate the amp with your speaker system and room environment. Pioneer’s Advanced MCACC Room Calibration is interminably long (and loud), so go off and make a cuppa while it runs.

It is a thorough and fairly accurate set-up though, but it’s still worth heading into the speaker settings for a manual check – our centre channel’s level needed adjustment.

You can also set up the VSX-923 using Pioneer’s free AV Navigator app – a support and installation guide that runs you through all the basics of wiring and calibration. Previously only available for Windows users, the software has now been updated for Mac and iPad users – simply download it from the Pioneer website.

The VSX-923’s menu system is rather convoluted when used in conjunction with the supplied remote control. You have to press the ‘Receiver’ button every time you want to adjust any audio settings or even when pulling up the uninspiring Home Menu – it can get quite tiresome, and we found ourselves studying the manual closely to access all the different sound modes and amp settings.

Before we can get too hung up on this, though, Pioneer’s control app for smartphones and tablets solves all our problems.

Pioneer’s iControlAV2013 is one of the best control apps we’ve come across. Not only can you control and adjust just about everything on your amp, it’s also beautifully designed, with colourful and elegant graphics. Free to download for iOS and Android, the 2013 version has been spruced up, and it’s as slick and user-friendly as ever.

We love this control app – it looks good on smartphones and tablets, and is much more fun (and useful) to use than the Pioneer’s remote and on-screen menus.

In the end, it all boils down to a matter of detail – the Pioneer VSX-923 can’t quite match the subtlety offered by the rival Sony STR-DN1040, but it’s nevertheless a confident and compelling amp thanks to its precision and clarity – and, of course, has one of the best control apps for smartphones we’ve ever seen.