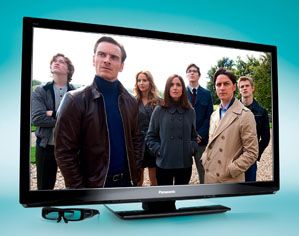 Our 2011 TV product of the year. There isn't a TV in its class to match it

Have we mentioned Panasonic’s pricing policy before? It’s even more pronounced with the TX-P42GT30. We've tested this set before, in a Group Test in June 2011 which it won, and at the time we quoted a nominal price of £1300.

A third of a year later it’s back to defend its title, with a www.shop.panasonic.co.uk price of £1400 and a real-world price of around £900. Go figure.

Add in Freesat, Skype and 3D
The extra cash buys 3D capability (but no 3D glasses – quite where Panasonic gets off building a 3D TV that can’t be used in 3D without extra outlay is anyone’s guess), Freesat reception to go alongside Freeview HD, Viera Connect online services like BBC iPlayer, AceTrax movie rental, YouTube, Facebook and the like, Skype and a more sophisticated looking chassis.

The GT30 bears comparison with its cheaper sibling (the £700 Panasonic TX-P42G30) for performance, too.

Rather than the G30’s easily corrected tendency to overstate green tones, our GT30 has a rather ruddy cast when straight from the box; easing back on the red tones helps take a lot of the warmth out of upscaled DVD pictures, leaving a beautifully neutral colour palette and the familial punchy contrasts.

With the majority of the picture-processing options defeated, the Panasonic handles motion really well too.

Freesat better than Freeview
Given the choice of the two high-definition tuners, we’d opt for Freesat – it’s slightly more vibrant and has even greater mastery of motion than the Freeview HD equivalent – although those without a satellite dish are hardly likely to be disappointed by the Freeview HD images the GT30 serves up.

In either case, blacks are impressively deep and detailed, and picture noise is kept to a bare minimum. Detail levels are high, edges are crisply drawn and contrasts punchy in the manner of Floyd Mayweather.

Blu-ray pictures in 2D are equally vivid, but never overblown, and images are impeccably lit (it may be something to do with Blu-ray’ s full-house resolution, but it’s even more important here than elsewhere to make sure the GT30’s colour temperature is set to ‘cool’.)

An accomplished all-rounder
The Panasonic’s just a hugely accomplished all-rounder. Put on a pair of 3D glasses and set appropriate content spinning, and the GT30 turns in a surefooted performance. Images are a trifle dim, but they’re virtually free from crosstalk and offer a more ‘rounded’, less terraced 3D picture than some rivals.

Only gruelling motion causes alarms, and the Panasonic doesn’t insist you sit bolt upright directly in front of the screen to enjoy the 3D effect.

The GT30 sounds relatively weighty and substantial. That’s definitely A Good Thing, too, although it struggles to escape the confines of the cabinet – some competitors sound a bit more spacious.

That’s a trifling complaint, though: just don’t pay the first price you see and there’s little downside to the GT30.

Watch our Awards video on the Panasonic TX-P42GT30