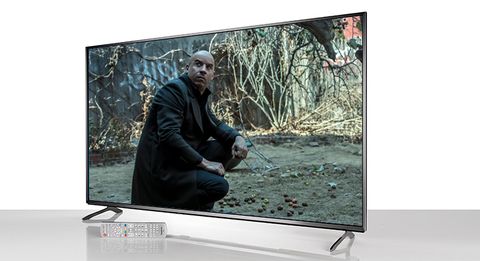 We can have few qualms with this reasonably priced 4K telly; its performance is still good enough to justify a bit of penny pinching

2015 saw a summer of love for Panasonic: four consecutive five-star review televisions between June and August, with one of those – the TX-40CS520 – grabbing our 2015 Award for a sub-£500 set.

Ignoring the company’s first-ever OLED (the TX-65CZ952B), which at eight grand is somewhat of an anomaly, this 50-incher is tasked with carrying that hot streak into the long cold winter.

Features & ease of use

The TX-50CX700 certainly has a fair amount to offer: 4K (with content accessible via Netflix, Amazon Prime, YouTube and USB drive), active 3D, an intuitive, Firefox OS-driven home screen and Freeview Play are the major attractions. For a product weighing in at £750, that isn’t such a miserly haul.

Having admired its squared-off chic, like one half of a graphic designer’s spectacles, we must begin by praising the fluidity of the user interface. Panasonic’s shrewdness to have evidently placed impetus on ease of use and navigation immediately gives it a head start on a clutch of competitors.

You shouldn’t have to work for your telly; the customisable home screen and general pace of things here ensures you won’t.

All settings menus are as easy to locate, so we begin by switching off each of the TV’s self-adjustment features and fine tune to our own liking.

While contrast isn’t as extreme as perhaps we’d like – blacks don’t delve to quite as deep a hue as some competitors, for example – the subtleties within Panasonic’s complex colour pallet give the picture an equally valuable asset.

It is those colour details in things such as hair and feathers that make you believe in the picture much more than the most profound blacks or whites.

Nonetheless, that pallet is still vibrant when representing the unashamed gaucheness of daytime and early-evening quiz shows – see Tipping Point, The Chase etc – but capable of insight during the midnight broodiness of River or Les Revenants.

We are pleased with the level of detail in both standard and high definition, so test its 4K credentials with some of KQED Science’s Deep Look videos. In a documentary about the nocturnal hunting habits of the owl, we are presented with the bird’s wing in all its resplendent glory.

We can fully appreciate the delicate use of colour and tone and almost completely forget about any shortfalls in contrast.

The sound is surprisingly insightful too. We play a selection of live recordings from BBC iPlayer and, though clearly this won’t match the performance of a pair of stereo speakers, enjoy a coherent, expressive and musical representation.

That translates to the basics, as well: there is decent weight to voices, making them seem more natural, and a decent dynamic range caters for more complex emotional performances. Stereo speakers or a soundbar would improve the sound, but are by no means an essential extra.

There are some niggles. Processing difficulties, for example: the fore and background tend to separate in a way that makes things appear as if they were filmed using a green screen.

Or at least if they were, it’s obvious. Our test set also suffered from uneven backlighting, which may or may not affect others.

That, along with the ordinary contrast, is where Panasonic loses a star. Even so, you won’t find many TV sets under a grand that are such a pleasure to watch and to use.

This isn’t quite the five-star standard of Panasonic’s summer offerings, but, nonetheless, it’s worth a place on the shortlist.