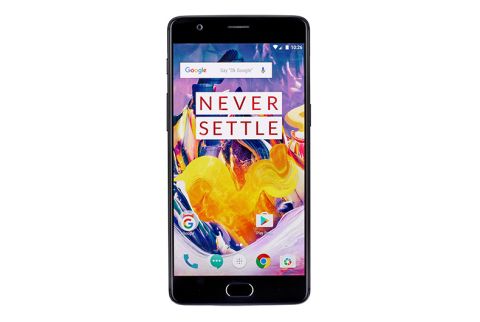 2017’s flagships can rest easy, but the 3T is still a strong performer that won’t cost you the earth

Several manufacturers have promised a budget phone with flagship specs, but few have actually delivered the goods. Since its launch two years ago, OnePlus is one company that has.

However, it seems to be getting harder to hold on to that promise. Google’s Nexus phones were dumped in favour of the higher-priced Pixel market. Huawei’s prices have been creeping up along with its user base.

And now, the OnePlus 3T is the most expensive phone the company has ever produced.

It comes just six months after the announcement of the OnePlus 3 too (which was absolutely fine), with just a few small upgrades and a £70 price lift. But at £400, does it still do enough to be considered good value?

On face value, the OnePlus 3T looks every bit the flagship handset. Its aluminium unibody frame is slim and solid, the curved back panel sits nicely in the hand, and it doesn’t look a bit out of place next to the big hitters of 2017.

Look a little closer at the spec sheet though, and you begin to uncover a few chinks in the OnePlus’ armour.

For example, although its dual SIM tray will be handy for power users, a lack of microSD card slot means you’ll have to fork out for the storage you want – either 64GB or 128GB. That’s something Apple users are used to, but even entry-level Android phones like the Moto G5 now offer a microSD card slot.

It is available in a choice of gunmetal grey (like our sample), soft gold or the limited-edition midnight black, all of which are pretty understated in the days of rose gold and chrome finishes.

The OnePlus 3T packs a bright 5.5in AMOLED screen, but does restrict its resolution to 1080p, rather than the 2K displays of some of its pricier rivals.

With the majority of the content still being Full HD, this doesn’t feel like a huge sacrifice, and we don’t notice any real difference in the crispness of icons or text compared to its better-specified competition.

However, the processing being used here does throw up some issues. While there’s more detail here than we could pick out on the Huawei P10, it’s still lacking some of the finer detail you might find on the iPhone 7 Plus.

This has a knock-on effect to things like landscapes and textures, which look rather flat.

The excellent contrast offered by the AMOLED display helps it deliver some welly in darker scenes, with blacks going really dark, and whites looking sharp and precise. There could perhaps be a touch more detail in both, but it’s not a deal breaker.

The colour balance isn’t too bad either, but sits on the richer side of neutral, so colours look deeper and more saturated than they do in real life.

While this makes for a more striking image, it means colours aren’t always as accurate as we’d like. For example, the red Netflix logo looks more blood orange than its usual deep red.

But like a lot of aspects of the OnePlus 3T, you can tweak what you see on your screen, with the ability to customise the screen temperature on a sliding scale between warm and cool.

Ultimately, we don’t feel we can get a more agreeable balance than the default, so we leave well alone.

The fingerprint scanner works as fast – maybe even a touch faster – than the iPhone 7; the textured notification slider on the left-hand side offers three settings instead of two for standard, silent and priority notifications only; and Oxygen OS’s vanilla-esque Android user interface offers a clean and fuss free experience that’s among our favourite on a third-party phone.

It even comes with a factory-fitted screen protector to help the Gorilla Glass 4 front panel to stay scratch free – though you can take this off if you prefer.

We throw on our Spotify playlist to get a feel for the 3T’s audio prowess, and quickly learn it’s an enthusiastic all-or-nothing performer.

It’s very forward in its character, which means that although it's clear and expressive through the midrange and vocals, it pushes everything at you, and all at once.

It’s not done in a way that makes it sound bright or poorly timed, but one that does sound just a touch relentless, which doesn’t work well for softer tunes.

Ultimately, it means there’s a lack of subtlety and, with everything sitting on one level, dynamics just fall a little flat. Hi-res tunes are supported, but fall victim to many of the same characteristics.

The built-in speaker doesn’t do a bad job if you’re choosing to listen to movies headphone-free at home. It’s a clear enough sound that dialogue is easily audible, plus it’ll go decently loud without sounding overly thin.

While the 16MP camera on the 3T is the same as on its predecessor (with a new Sapphire glass coating on the lens), the selfie camera has had an upgrade from 8MP to 16MP. There’s also new electronic image stabilisation to help keep 4K video steadier too.

The improvements are felt all around. The camera app is fairly simple, with not much to distract you from the job at hand. There are no slow-motion or panorama modes, but you will find auto HDR and HQ (high quality) settings, though they can’t be used together.

We find the HQ option works well at night to help capture more detail and less smoothing, but otherwise we largely lean towards keeping auto HDR on for more detailed shots in direct sunlight.

The manual mode is decently specified for those that know how to tinker with their shots, plus the option to shoot in RAW, but we settle in with the auto mode to see how it fares.

Shutter speed is fast and shots are taken quickly one after another, but the focus isn’t always reliable, particularly in dimmer light.

That’s because both cameras have apertures of f/2.0, which isn’t particularly low-light friendly, and can lead to some fairly hefty smoothing and loss of detail in an attempt to guard against noise. The HQ setting regains some of that detail, but don’t expect miracles.

Give it decent light though, and like most phones, the 3T thrives. Here, photos are sharp, well balanced and show off a bright and punchy colour palette.

Moving around the OnePlus 3T is smooth and effortless, and in our time with it, we never once feel that we’re getting close to testing its limits.

That’s down to the 2.3GHz Snapdragon 821 and 6GB RAM sitting at its core, supported by the Adreno 530 GPU, which ensures everything from Asphalt 8 to Cut The Rope runs without hiccups or dropped frames.

The 3,410mAh battery has seen a boost from the OnePlus 3. Streaming an hour-long video from Netflix over wi-fi at half brightness sees a fairly respectable 8 per cent drop (Huawei’s P10 dropped 13 per cent by comparison), and we usually make it through a working day without reaching for the charger.

MORE: Five of the best smartphones

Lengthy gaming sessions increase the likelihood of that by some margin though, so do bear that in mind if you can’t help but reach for Pokemon Go on your lunch break.

Luckily, if you do find yourself caught short, OnePlus’ Dash charger should get you back up to 100 per cent within an hour.

And finally, there’s no waterproofing, which feels like quite a misstep in a phone of this quality in 2017. Even the iPhone can withstand a dunk in the wet stuff.

Flagship killer might be too ambitious a label for the OnePlus 3T, but even as the priciest OnePlus to date, it remains value for money.

There’s still plenty to admire, and it’s definitely one to consider if you’re happy to negotiate its occasional shortcomings.

Of course, we’d like to see improvements in sound and video. At this price, it’s up against the likes of the midrange Samsung Galaxy A5, which pips it in both. Expandable storage and waterproofing wouldn’t go amiss either.

But whether it can it reach those flagship heights without losing the budget price remains to be seen. With rumours that the OnePlus 5 could be with us in just a few months’ time, we might not have long to find out.

See all our Android phone reviews