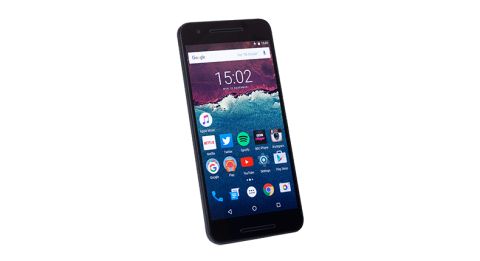 The Nexus 6P is better than before, but fails to compete with current high standards

Google took a hit when the huge-screened Nexus 6 failed to live up to expectations last year, and there are plenty of big screen competitors around, boasting fancy features and superb performances to boot. So will the new Nexus 6P make a comeback?

The P in the name stands for ‘Premium’, and the new Nexus certainly looks and feels more elegant than previous plastic-coated models. Google has given the keys over to Chinese brand Huawei, which has milled the Nexus a slim, metal unibody casing.

The build quality is solid, the anodised aluminium finish is smooth to the touch and, while it doesn’t look as spectacular as the metal and glass design of the Samsung Galaxy S6 Edge+, we think it’s the best a Nexus has ever looked.

The 5.7in screen is a much more sensible and manageable size than last year’s giant 6in ‘phablet’. It’s still a big screen, but the barely-there bezels and subtly curved back make the Nexus 6P fairly comfortable to hold in one hand. Using the phone properly is still a two-handed operation, though.

A bulging strip of black glass at the top, which houses the camera and notification sensors, breaks the slender metal body. It is an interesting contrast, especially if you’ve opted for the silver or white versions.

As with the previous Motorola-designed Nexus 6, the ridged power button and volume rocker sit at the right side of the smartphone. The 3.5mm headphone port is still at the top, but the SIM card slot has moved to the left.

It’s a neat and tidy design.

The Nexus 6P’s screen has a 2560 x 1440 Quad HD resolution and looks bright, pin-sharp and appealing. App icons and text are etched with clean, crisp lines.

On its own, the AMOLED screen is rich and colourful. There’s warmth to the colours that makes videos look inviting. Green trees look lush and nightscapes are punchy and glowing.

Viewing angles are excellent when playing apps or watching videos. Place it next to any of its big screen rivals, though, and it’s clear that it’s not as dynamic and detailed in comparison.

The most obvious issue is a yellow tinge to whites. This shows up most on websites, where a creamy background means you won’t get that stark, clean contrast that you get from rivals like the Apple iPhone 6S Plus.

Play the Paddington trailer in 1080p, and the warm presentation, while lovely, isn’t totally convincing. Paddington’s red hat looks more orange, skin tones are a bit more tanned than normal, and blue skies could be cooler and crisper.

Next to the iPhone, finer details look soft and hazy. Blacks don’t go as deep and solid either, meaning landscapes and interiors lack a touch of depth and strong contrast.

The iPhone 6S Plus delivers a more natural colour balance and subtler image, while even the Moto X Style is capable of a more solid, punchier and crisper picture.

Disappointingly, Nexus 6P’s music performance also fails to impress. Google continues to support FLAC files up to 24-bit/96kHz, but it’s a shame that the sound quality doesn’t do justice to the higher resolution.

We played a range of songs, from a WAV file of Red Hot Chili Peppers’ By The Way to Adele’s Hello on Spotify, and the Nexus 6P simply didn’t have the precision or dynamics to deliver a truly satisfying listen.

Voices don’t sound convincing, while the tactile feel of guitar twangs and drum hits is missing. Notes could be clearer and more solid, too.

The sound is big and loud, especially when played through the front stereo speakers. But it can’t match the detail, timing and solid presentation of class-leaders like the Apple iPhone.

The Nexus 6P’s camera has had an overhaul as well, with a 12.3MP rear camera that uses a two-tone flash. The front camera has been bumped from 2MP to 8MP, too. Both use bigger pixels to let more light in (a bit like HTC’s UltraPixel), which should, in theory, mean better snaps in low light conditions.

Shots are crisp and bright, but they suffer from oversaturation and a lack of subtlety. It’s the same colour balance that you get with its video performance, with bright colours looking more vibrant than realistic.

The pervading yellow tinge gives a summer glow to every picture – which looks nice, but isn’t true to life. The textures of cloth and gravel aren’t crisply conveyed, either. The same shots on an iPhone 6S Plus are crisper, more detailed and more realistic.

You can still shoot videos in Ultra HD 4K at 30fps, while standard features like HDR, Panorama, timer, and burst modes make a comeback. Camera fans will be disappointed that there’s still not much in the way of manual modes, and that processing HDR photos hasn’t got any quicker.

The stripped-back camera app may be simple to use, but it’s a tad boring and lacking in features compared with those of Apple, Samsung and HTC.

No new flagship smartphone would be complete without a fingerprint sensor, and the Nexus 6P has a speedy sensor that’s quick to set up and even quicker in use.

The Nexus Imprint sensor is a rounded indent at the back of the smartphone, where your index finger naturally rests (it replaces the Motorola logo from the previous Nexus). We found it intuitive to use, although some may have to readjust their hold to reach the sensor.

The only drawback is that since it’s placed on the back, you can’t simply unlock your phone if it’s placed flat on the surface. It’s a small niggle, but Apple and Samsung make it that bit quicker to turn on their phones using the front sensor.

To combat that, Nexus has a feature called Ambient Display, which wakes the screen whenever you pick it up or have a new notification. You’ll still have to unlock it, though.

Google’s Nexus smartphones may not be at the top of the leader board when it comes to picture and audio performance, but the reason it’s so coveted is because of its pure Android experience. It’s the first to get all the benefits of the latest Android updates, and sure enough the Nexus 6P comes loaded with Android 6.0 Marshmallow.

We’ve always liked pure Android for how clean and fast it is, stripped of any additional bloatware from other manufacturers. A 64-bit Qualcomm Snapdragon 810 processor powers the Nexus 6P, with 3GB of RAM making sure everything is fast and stutter-free.

Opening apps, playing high-graphics games and just general swiping across the screen is incredibly smooth, with no lags in sight.

The Marshmallow update is more about tweaks than a complete overhaul, with some great new features – such as Google Now on Tap, Doze, Android Pay – making the whole Android process even smarter and slicker.

Now on Tap is the killer new feature that scans any app or webpage you’re on, and gives you related links so you don’t have to leave the app to start a new Google search from scratch.

This works best on famous names, films, restaurant menus, and some music apps like Spotify. All you have to do is hold down the Home app, and an overlay will appear with shortcut links.

So if you’re reading an article about Star Wars: The Force Awakens, Now on Tap will give you links to the trailer, cast list, images and more news for the film, as well as separate links for any other actor or film mentioned in the article.

It’s still in a work-in-progress: you won’t get the same links for each keyword, nor does it work as comprehensively across all apps. But it does make googling things that bit faster.

The standout feature on the Nexus 6P is its hefty 3450mAh battery, which lasts throughout the working day without needing a top-up. In fact, coupled with Marshmallow’s Doze feature (which stops apps from using up the battery when not in use and when the screen is turned off) there were days when we didn’t feel the need to reach for the charger until bedtime.

Heavy usage will no doubt shorten the lifespan, but we did find the Nexus 6P lasted much longer throughout the day than some its fellow big-screen rivals. Unlike previous generations, there’s no wireless charging support.

It’s also super fast when charging up. This is down to the new USB type C (or USB-C) connector, which promises faster charging and file transfer rates.

And it sure is speedy. It’s an odd thing to get excited about, but it makes a huge impact when you can charge up the Nexus 6P from empty to 100% in just under an hour-and-a-half.

The other good thing about USB-C is that it’s reversible (like Apple’s Lightning connector), which means you won’t have to fumble two or three times to plug it in the correct way.

Early adoption comes at a price, though. No other plug or device supports USB-C yet (Apple’s latest MacBooks uses USB-C for charging only).

The cable supplied in the box is USB-C at both ends, so you won’t be able to plug in straight into your laptop. Google helpfully inclues a USB-A adapter, which we'd take pains not to lose.

Android users who have amassed a large collection of micro USB cables and chargers will be frustrated with the change, but it’ll be worth it once USB-C becomes the new standard.

As before, there’s no micro SD card slot on the Nexus 6P. But this is the first Nexus with the 128GB storage option, which you can get SIM-free for £580. That’s pretty decent considering the iPhone 6S Plus equivalent costs upwards of £700, while Samsung’s Edge+ maxes out at 64GB for over £600.

Last year’s Nexus 6 was the first time Google’s smartphone wasn’t the usual half price of its rivals, but the Nexus 6P is still the far more affordable option.

The new Nexus 6P is a champion of Android, and purists will love the smarter Google Now features and slicker performance that comes with the latest update.

But with rival flagships setting the bar so high, the Nexus 6P’s picture and sound quality don’t quite meet the standards expected.

It’s still enjoyable to use as a smartphone, though. The screen is exciting to use, the battery lasts long, and the affordable price tag will make it an attractive buy for those that want a flagship on a bargain.

The Nexus 6P is a decent smartphone, but isn’t the triumphant comeback we were hoping for.

See all our Google news and reviews