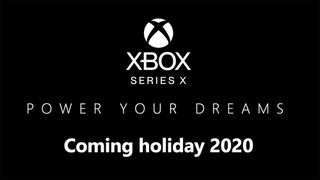 It seems Microsoft is confusing itself when it comes to the Xbox Series X release date.

Eagle-eyed Xbox fans yesterday spotted that the official Xbox Series X website was showing Thanksgiving 2020 as the official release date (see below). This was a change of tack from the previous Holiday 2020 guidance. So that was news.

Now, Microsoft has changed its mind, stating Thanksgiving 2020 was an error and that the plan remains a Holiday 2020 release.

An Xbox product page in some regions inaccurately listed the launch date for Xbox Series X as Thanksgiving 2020. We are committed to launching Holiday 2020March 18, 2020

So, the Xbox Series X may not in fact be out in time for Black Friday, we may have to wait until December (or whatever Microsoft means by "Holiday 2020") after all.

Earlier in the week Microsoft had teased more specs around the next-gen Series X console, while Sony revealed more details around the PS5 hardware.

Xbox Series X promises four times the power of the Xbox One X and is being billed by Microsoft as the "fastest, most powerful games console ever." To match that dramatic leap in performance, the Series X gets a new 'tall tower' design and a new wireless controller.

So roll on the Xbox Series X vs PS5 console war, this "Holiday" season...