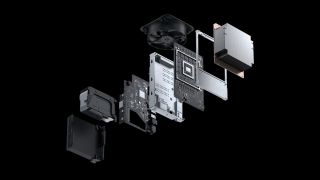 Microsoft has finally released the specs for its next-generation 8K games console, the Xbox Series X.

In a series of releases through Xbox.com, and an exclusive briefing attended by Digital Foundry, more details about the console are now known, from the storage available to the connectivity options on offer, to the design tweaks made to its new controller. The news comes just as Sony confirms its plans to reveal the PS5 on Wednesday 18th March.

As suspected, the Xbox Series X console will come with a 1TB internal Solid State Drive (SSD) as standard, but it’s now been confirmed that storage will be expandable via 1TB expansion cards. Microsoft has teamed up with Seagate to design the proprietary drive, which Digital Foundry describes as “very short, quite weighty… and rather like a memory card”.

According to Digital Foundry, the console pulls in air through the bottom of the console where it circulates through the machine and comes out of the top vents, via a 130mm fan.

One big piece of news is that the Xbox Series X won't have either the HDMI input or optical digital output you can currently find on the Xbox One X and Xbox One S. The HDMI input was introduced to Xbox consoles so you could plug in and control a set-top box, although many felt it was never really implemented properly.

The loss of the optical output could have a bigger impact on users, though. It means if you want to enjoy surround sound from your Xbox Series X you’ll need an AV receiver with HDMI inputs.

Xbox confirmed it will include an Ultra High-Speed HDMI cable in the box to connect to your display. It should come in particularly handy if your display has HDMI 2.1 inputs and can take advantage of the Xbox's features such as high frame rates up to 120fps and Variable Refresh Rate (VRR).

Other new features revealed include the ability for the Xbox Series X to use machine-learning to add HDR to legacy titles that didn’t support it as standard at launch.

Xbox has also released a video showing Xbox Series X loading times compared to the Xbox One X, which can be seen below.

More details have also been revealed about the new wireless controller for Xbox Series X. The shape has been tweaked slightly to make it work better with different hand sizes. According to Ryan Whitaker, Senior Designer at Xbox, this has been achieved by “rounding the bumpers, slightly reducing and rounding parts around the triggers, and carefully sculpting the grips”. The triggers, bumpers and grips also get a new dotted texture for better control.

A USB-C charger indicates the presence of a built-in rechargeable battery, while the controller will also be compatible with Xbox One consoles, and able to remember multiple devices.

The D-pad has also been revamped into a hybrid design to improve performance and accessibility. There’s a deeper “dish” for your thumb to rest in, and the angles are “finely tuned to give you a good amount of leverage with minimal movement”.

The console wars certainly appear to be hotting up in the year that will also see PlayStation 5 hit the market at the end of 2020, assuming there are no delays.