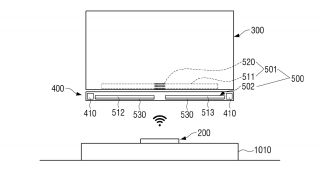 Wireless is taking over the world and now Samsung is setting its sights on delivering the first truly wireless TV, eliminating the need for that pesky power cable.

Samsung has already got pretty close. The company's latest TVs, such as the new flagship Q90R QLED, uses the One Connect box for all your cable connections, with only one wire needed from the box to your screen. But why have one wire when you could have none at all?

With more and more people wall-mounting their TVs, Samsung wants to do away with that cumbersome cable altogether and a recently released patent filing, spotted by Let's Go Digital, shows the company's plans.

The wire-free TV would use wireless power transmission, shown here in the form of a slimline transceiver that connects magnetically to the back of the display. This would then talk to a wireless transmitter box, presumably a little like a One Connect box, which would be connected to mains power.

While wireless power isn't new, it has so far been limited when it comes to operating distance and the amount of transferable power. Similarly, while it is possible to get a battery-powered, portable TV, Samsung is clearly planning something which can power a big-screen TV straight from mains power, without the need for any cables from the display.

As with all patents, a pinch of salt is required, but following transparent and rollable TVs, it will be interesting to see if wireless TVs become the next big thing when it comes to trade show TV prototypes...