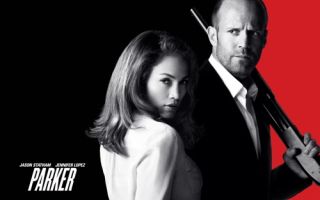 Jason Statham plays the usual – a criminal with a 'code' that separates him from the other bad guys. In Parker, an adaptation of Donald E Westlake's novels, Statham plays a thief who gets double-crossed by his team, gets left for dead and then spends the rest of the film seeking revenge. Cue gunshots, fights, car chases and the occasional one-liner. Also stars Jennifer Lopez, Michael Chiklis, Nick Nolte and Patti LuPone.

Fire, Part Two. Effy's story comes to an end as she confronts the consequences of an affair with her boss and finds crucial, damning information about the London hedge fund she now works at.

Luther just can't catch a break when it comes to love. A first date with Mary gets interrupted by another murder, and the detective buries himself under cold case files in the hope of finding a link that will catch the copycat killer before he strikes again.

Elsewhere, Ripley has to pick a side: does he turn in Luther and his unorthodox ways, or will he stay by his side?

Buffet Froid. If you've had enough of killers hiding under your bed thanks to Luther, you might want to give this episode a miss – but you'd be missing out on a crucial episode that shows a turning point in the series.

As the FBI hunt a mentally ill girl who believes that she is dead, Will searches for a medical reason behind his blackouts and instability. But his hopes for finding any answer is dashed by Hannibal, who has his own plans – plans that we're only just starting to glimpse...

Scared to Death. Taking inspiration from Japanese horror film The Ring and all its tropes, the team investigate murders that occur after the victims watch a supposedly supernatural video. As they try to find a link between the seemingly random victims, Castle is convinced he's next to die after he accidentally watches the killer video.

A wonderful stop-motion animated film about a young boy who can see and speak to the dead – a talent that makes him an outcast in his town. But when a witch's curse raises the dead and threatens to annihilate the community, only Norman can help save the day (with a little help from a mismatched group of friends, family and the school bully).

A Scandal in Belgravia. With last week's airing postponed due to the tennis, the series two rerun starts tonight instead. Fun fact for fans: part of the title for the third season's last episode (currently filming) is hidden in the opening credits.

With The World's End hitting UK cinemas on 19th July, it only makes sense to rewatch Simon Pegg, Edgar Wright and Nick Frost's the 'Blood and Ice Cream' trilogy from the start. 2004 saw the introduction of the romzomcom genre – Shaun attempts to get his ex-girlfriend to take him back in the midst of a zombie apocalypse.

Sachsenring. It's round eight of the MotoGP 2013 season, and we're in Germany this weekend. Will Valentino Rossi grab another win after his first victory of the season in Assen? He's got stiff competition from Dani Pedrosa, who'll want a repeat of last year's win to further his lead in the standings.

The three presenters take three mid-range convertible supercars across mountain passes, ghost towns, and abandoned airports in Spain – and build their very own street circuit in the deserted developments of Madrid. Sherlock star Benedict Cumberbatch is the Star in a Reasonably Priced Car.

Dish and Dishonesty. Blackadder and Baldrick reinterpret themselves as butlers to the frivolous Prince Regent in 18th Century England.