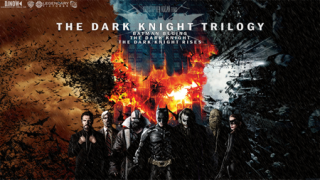 Welcome to The Week in HD, our guide to all the must-see high-definition TV shows, films, Blu-ray releases and sports to grace your screen over the next seven days.

A must-have for any Batman fan, all three films – Batman Begins, The Dark Knight, and The Dark Knight Rises – have been boxed up and Blu-ray'd just in time for Christmas. From the origins of Bruce Wayne and Batman himself, to going head-to-head with the Joker, and the graduation from bat vigilante to the protector of Gotham City, the Christopher Nolan-helmed trilogy has set the bar for future adaptations.

It's the 100th performance of the Royal Variety Performance, and the Queen's in attendance tonight! Hosted by David Walliams, the night will be full of shiny performances from all fields of entertainment, including Pudsey the dog – the winning act of Britain's Got Talent.

The eight chefs that survived the last four weeks of heat are now pooled together in the semi-finals to cook a dish that'll get them through to the next round – two more chefs will be leaving us tonight.

An in-depth and minute-by-minute account of the hurricane superstorm Sandy that hit New York last month, with satellite and CGI imagery, forensic analysis and personal accounts by the people affected by Sandy.

The six semi-finalists get paired off and sent to punish their stress levels by working in top hotels across the country. Tonight, they it's the Michelin-starred restaurant of The Berkeley Hotel, and the two contestants must cook their signature dish (lobster!) to perfection.

It's the penultimate episode of the excellent Science Club, and there's brains on the menu. Dara and his resident scientists and researchers take a look at the control centre of our very being, exploring the effects of smart drugs, how it controls limbs remotely, and its similarities with the insides of a smart phone.

Another pair of semi-finalists head off to Midsummer House, under the service of Daniel Clifford, who has been running the restaurant for 15 years. They go head-to-head under ever-increasing pressure to create the perfect dishes (lamb!) and then serve up dishes inspired by their experience to the MasterChef judges to fight for a place in the final.

The third pair of semi-finalists head to UK's only two-Michelin starred pub, The Hand and Flowers, in Marlow, Buckinghamshire. After cooking the signature dish (duck!) and impressing the judges with their new skills, only one will survive to go on to the next round.

There's fauna falling from the skies – birds in America, fish in London – along with masses of sea foam hitting the coast of Australia to create the world's biggest bubble bath party, mysterious patches of eerie light in oceans known as 'milky seas', and giant terrifying holes that appear out of nowhere and swallow up whole buildings and lakes. They're some of the weirder moments of Nature, and they might just prove inspiration for the next Bruckheimer disaster blockbuster.

Bill Murray is a cantankerous, cold-hearted and cynical TV executive who is visited by the Ghosts of Christmas Past, Present and Future in this late 80s adaptation of Charles Dickens's A Christmas Carol.

Overkill. Castle finds himself competing with the rather charming Detective Demming (guest star Michael 'Sam Anders' Trucco from Battlestar Galactica) to solve a murder, and for Beckett's attention.

This special packs in the best highlights of the David Attenborough series, exploring the spectacular scenes of the harshest of winters and the melting summers of the Earth's polar regions. There are adorable tiny little polar cubs starting their lives in the Arctic north, while in the south the Adelie penguins completely steal the show by their comical stone-stealing habits to build their nests.

Before he was Batman, Christian Bale impressed with his body-punishing role as an insomniac factory worker Trevor Reznik, who starts to doubt his sanity after he hasn't slept in an entire year. Influenced by Nine Inch Nails and Fyodor Dostoyevsky, this psycho-thriller's a disturbing but enthralling watch.

Rome: A History of the Eternal City - BBC HD - 9pm

The ancient Romans are virtually inseparable from their plethora of gods and goddesses for just about every aspect of life, and this documentary explores how daily life and events revolved around worshipping and sacrificing to the Roman deities.