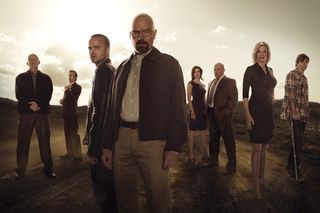 Hello and welcome to The Week in HD – our guide to all the must-see high-definition TV shows, films, sports and Blu-ray releases to grace your screens over the next seven days. You can also get daily updates on what's on by following our twitter feed @TodayinHD.

All good things must end. AMC's hit drama Breaking Bad entered its final season and judging by the reviews it bowed out on a high. Some of us can't wait to watch it after spending the past few months putting our fingers in our ears and shouting whenever someone started talking about it...

What better way to spend an evening in than watching five men drink themselves into a stupor? With positive critical notes after its theatrical release, regular punters (that's you and I) seemed a little more split. We think that if you go in expecting the same feeling you had when you watched Shaun of the Dead you might come out disappointed.

Taken on its own, this is a rollickingly good (and British) take on the end of the world. The downside? It'll put you off drinking for a while. Maybe that's for the best.

We thought Despicable Me was a decent, fun family film that wasn't especially excellent in any areas, so we weren't expecting the sequel to be received with this much fanfare.

The sequel is more of the same, but it's still a charming film that won't leave Pixar sweating about its place at the top of the animation heap. We do love the Minions.

And we kick off the week in sport with the first Midlands derby of the season. Both teams will be looking for a scalp in an intriguing encounter that sees them level in the table on 14 points.

Panorama Undercover: The Truth About Amazon BBC One HD, 8.30pm

A half-hour investigation into the work practices adopted by online retail monolith Amazon. We tend not to think of the people who work at one of the biggest retailers in the world to ensure our deliveries are sent. Panorama goes undercover to see what happens once we click 'buy'.

With Arsenal almost certain of progressing to the second knockout stage of the Champions League, they'll want to make sure they get it done and dusted in their last home game of the group.

Four of the eight chefs from the last heat return to face three more tests before the judges decide their fate. With the temperature rising, only three chefs will be going through, leaving one to pack their pots and pans for home.

An Unnatural Arrangement. The other show about Sherlock Holmes sees the detective digging in to the life of a man who's been the subject of a home invasion. What will he uncover, we wonder…

More Masterchef. If you're not hooked on watching delicious-looking food prepared and eaten, then… well, something's gone amiss.

We can barely cook chocolate Rice Krispies cakes and yes, we do consider that as cooking. We need all the help we can get.

Necromancer. We've just about managed to get over our shock of there being a Sleepy Hollow TV show and we're now quite enjoying where its going. This time, Ichabod finds out what's driving the headless horseman on his relentless pursuit.

We'd like to know too, considering he doesn't have a head…

Swansea entertain Valencia in the Europa League. The Spanish club has fallen on hard times of late, reflected in the Welsh team's pasting of them when the teams met in Spain. Valencia will be looking for revenge, but Swansea will want to confirm their place in the next round of the competition.

Cloudy with a Chance of Murder. It's getting a bit dicey for Castle and Beckett as they continue to hide their relationship from the powers that be while investigating the murder of a weather reporter. There could be stormy weather ahead…

Repairs. After last week's not-so-good episode, we're really hoping that this is the epsiode to get the show back on the right road.

Repairs sees the team haunted (and hunted) by a mysterious force that threatens to destroy them all (but probably won't) and only a secret from May's (above) past can save the team.

Kinky. With Sandi Toksvig, Janet Street-Porter and Johnny Vegas. For once, Alan Davies is the sensible one.

Although it's not in 3D, that in no way diminishes the effect of Ang Lee's Oscar-winning drama of a teenager called Pi who's left adrift after the ship he's on sinks.

What follows is a visually stunning story of overcoming a seemingly insurmountable hurdle and a rather spiritual tale that panders to no religion. Not your average blockbuster this one.

Immortals does not have the best of reputations. Coming after Zack Snyder's 300, many viewed it as an attempt to replicate that film's style-over-substance approach.

Saying that, there isn't much substance in this film either, but Henry Cavill's (the current Superman) quest to gain revenge on Mickey Rourke's quite despicable villain is one to watch just for the ridiculous OTT action that director Tarsem Singh stages. And it should look glorious in HD.

After United's stuttering start in the league and Tottenham's mauling at the hands of Manchester City, it's tight to call a victor in this clash with both teams trying to hang on to the coat-tails of early pacesetters Arsenal.

The NFL is getting more and more popular in the UK but, with the recent matches held at Wembley Stadium being sell-outs. Home team Kansas City Chiefs are in a bit of rut having lost their last two matches after winning their first nine.

The Denver Broncos also lost their last match, so both teams now have identical records at the top of the AFC West.

Who will win? It may come down to a battle between the quarterbacks with the Broncos' Peyton Manning and the Chiefs' Alex Smith both in splendid form.