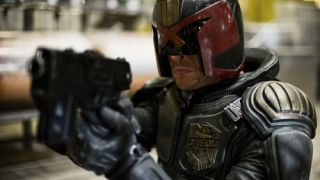 Welcome to the Week in HD, our guide to all the must-see TV shows, films, sports and Blu-ray releases to grace your screen over the next seven days.

In the future wasteland of America, the violent metropolis of Mega City One is ruled by ruthless criminals, with former prostitute turned psychic drug dealer Ma-Ma (Lena Headey) ruling over a 200-story vertical slum. The only force of order are the Judges - urban cops with the power to judge and execute instantly. When the most feared Judge Dredd (Karl Urban) is tasked with ridding the city of a powerful drug that slows down people's experience of reality, he clashes with Ma-Ma in a violent, gory battle. There's burning brains on offer.

A turf-war raging between bootleggers and corrupt authorities in Depression-era Virginia is made even more enticing with the impressive cast of Tom Hardy, Guy Pierce, Shia LeBeouf, Gary Oldman, Jessica Chastain, Mia Wasikowska.

A look at how photography shaped the British rock band's image, with the cover image for The Clash's London Calling, taken by Pennie Smith, becoming an instant rock photo icon.

Je Regret Nothing. Miranda is trapped in her flat and fast unravelling when having to look after an ill Penny, and takes a look back at her life regrets.

Professor Jeremy Black explores the reasons behind why the one of the greatest eras in history, the Industrial Revolution, happened when it did in the 19th century, and why it happened in Britain.

The trailer looked intriguing enough, and the plot even more so: five strangers from an online comic book forum find themselves in possession a legendary cult graphic novel original manuscript, and when they meet up, they find a mysterious organisation called The Network hot on their heels - and will do anything to have that manuscript.

Robert Downey Jr takes over the world with charm and humour as he makes his own Iron Man suit after a change of heart from dealing weapons to storing them all in his suit to save the world one snappy comeback at a time.

Slice of Death. One of the sillier Castle episodes - and Castle is brilliant when it goes silly - where multiple pizza joints are embroiled in a neighbourhood 'pizza war' which results in a journalist turning up dead in a pizza oven.

Directed by Spike Lee, this bleak but riveting film follows Edward Norton's drug dealer on his last free night out with his childhood best friends, his girlfriend and his father before starting a seven-year prison sentence.

If you're missing your regular dose of QI, here's a compilation show of all the best bits from Series H.

Funnier than expected film with Robert Downey Jr, Ben Stiller, Jack Black and an inspired turn from Tom Cruise, spoofing Hollywood's pampered actors and the filming process of a war action movie, when they get stuck in a real world conflict.

Springfield becomes quarantined under a huge dome after Homer pollutes the water supply because of his pet pig, Spider Pig. The fugitive Simpsons managed to escape the dome, and now have to save their town from total annihilation by a big evil corporation.

Written by former Doctor Who showrunner Russell T Davies, this show sees young Tom, a secret schoolboy wizard, having to stop the invading alien race Nekross from eating all the magic on the Earth.

Sir Patrick Stewart rides to Italy with Sir Stirling Moss in a classic Gull Wing Mercedes, all the while discussing the racer's career, including his near-fatal crash. Sir Patrick also gets a chance to drive a 1957 Formula 1 car at the British Grand Prix circuit.