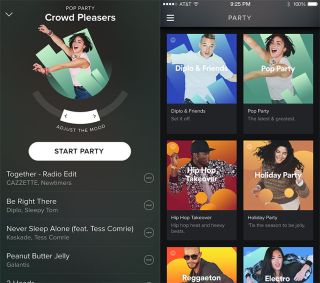 Spotify has introduced yet another fresh feature in an attempt to entice new users. The Party feature lets you choose DJ-style mixed playlists, from chilled parties to something more upbeat. Each song in a playlist is beat-matched and mixed to make sure your party passes without a hitch (or any silence between tracks). DJ and producer Diplo has delivered his own Party mix of 120 tracks.

Horch House has made it its mission to bring the magic of analogue master tapes to life for the 21st century. The company, based in Austria, is bringing the sound of the master tapes to a variety of formats, including reel-to-reel tapes, audiophile-grade vinyl records and hi-res audio formats: 24-bit/96kHz and 24-bit/192kHz, each in WAV, DSD in DFF.

Tapes are converted using a “soft refurbishing” process as opposed to “remastering” to retain the original sound quality.

For more information and to buy copies, head to Horch House's website.

Alpha Design Labs (ADL) has launched the Stratos, which packs a whole raft of features into a compact box. It's been designed to take everything that was good about the GT40 - which we awarded five stars - and make it even better. The Stratos is a USB DAC, A/D converter, preamplifier, MC/MM phono stage and a headphone amp. It supports PCM playback up to 32-bit/384kHz and DSD. Three two-channel headphone amplifiers are on board, two power the XLR balance output while the other powers a 6.3mm output.

MORE: Turn your vinyl into hi-res files with the Furutech GT40a

DALI has launched a new custom installation speaker: the Phantom H-120. It’s designed to be used when space won’t allow for floorstanding speakers and external subwoofers. The H-120 features a 5.25in midrange driver, 28mm soft dome tweeter and a 12in bass driver.

DALI has carried its wood fibre cone technology over to the H-120 and it's powered by a double-magnet motor system to start and stop the assembly at speed.

A Plex app is also now available for Apple TV. It's the first time Plex has been able to run a native app on the device.

Qobuz has updated its Android app, with particular focus paid to the current playback screen, which should now be easier to navigate and feature more information.

Qobuz has recently gone into receivership, but says there are interested buyers. Two offers have been made to the Commercial Court in Paris, with a final decision to be made on 29th December 2015.