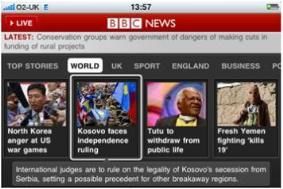 The BBC Trust has given given the all-clear to the launch of the BBC's iPhone apps despite commercial rivals' concerns about their market impact.

And with no further delay, the BBC has today launched the BBC News application (pictured) for the iPhone and iPod Touch, with more platforms set to be covered later this year.

BBC trustee Diane Coyle, who led the review, said: ""The trust has a duty to represent the interests of licence fee payers, who will increasingly expect to access BBC content in this way, but also to listen to concerns raised by industry.

"In this case we have concluded that while the Apps market is developing quickly and we will monitor the launch of BBC apps, a PVT (public value test) is not required."

The Trust said a public value test was not required as the apps did not involve the creation of new content, but that it would monitor the impact of the apps and review six months after launch.

While the BBC may never be able to release an iPhone app in the UK, the company's American operation has seen the BBC News app for the iPad soar to 12th in the iPad free apps chart in the US.

As our story below reported, the BBC Trust is currently investigating whether the corporation should be allowed to deliver free iPhone apps in the UK.

But because the BBC is a commercial operation in the US, there are seemingly no such issues with apps and, says the BBC, no decision for the BBC Trust to make.

A joint operation by BBC UK, BBC Worldwide and Mobile IQ, the BBC News iPad app will host ads to turn the free app in to, it hopes, a money-making venture in the US.

With Apple's iPad set to go on sale later this month in the UK, it looks likely that UK iPad users will have to wait for the consultation's ruling before any BBC apps become available.

After a complaint by the Newspaper Publishers Association, see original story below, the trust has asked for the planned launch to be suspended until an investigation is concluded.

So it looks like it could be back to the drawing board for the BBC's iPhone apps.

The BBC Trust has been urged to block the corporation's plans to launch phone apps for its news and sports content.

The Newspaper Publishers Association (NPA) says that the corporation would "damage the nascent market for apps", according to the BBC News website.

What's more, the NPA says it will also raise the issue with the Department of Culture, Media and Sport, and MPs on the Media Select Committee.

"Not for the first time, the BBC is preparing to muscle into a nascent market and trample over the aspirations of commercial news providers," says David Newell, director of the NPA.

He says the market for iPhone news apps is a "unique and narrow commercial space" that would be "distorted" by the BBC apps.

The BBC has announced it will offer iPhone apps for its news and sport content from April.

The free iPhone apps will be followed by versions for Blackberry and phones running Google's Android software, says the Beeb.

Other news organisations such as Sky, The Daily Telegraph and the Guardian already offer iPhone apps.

Erik Huggers, BBC director of future media and technology, says the BBC audience "want to access the digital services that they have paid for at a time and a place that suits them".

"Today's announcement means that we are catching up with our audiences," he told the Mobile World Congress in Barcelona.