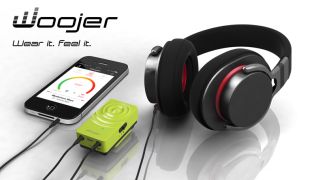 That's because this matchbox-sized device converts audio signals into a "tactile sensation" when it's worn on the body, connecting between the source of your music and your headphones.

Woojer features patent-pending technology that transforms the audio input into a vibration, which its manufacturer says is felt – but not heard – in order to provide an "immersive experience".

For example, Woojer says it can reinvigorate classic music by hooking the device up to the bass-enhancing iOS app (available soon on Android) that has eight settings for different genres.

Alternatively, Woojer can also help make your film collection come to life by letting you physically feel explosions and more without turning up the volume. The same can apply to gaming.

The device is now about to start shipping at a cost of US$99 (around £62) after it was successful in its Kickstarter crowdfunding campaign, receiving support from more than 1700 people.

It measures 41mm x 29mm x 68mm and weighs just 73g, while your Woojer will also come with a chest magnet, an audio cable, a wall charger with USB outlet and a USB charge cable.

Woojer co-founder and CEO Kfir Bar-Levav said: "Headphones alone cannot deliver the sensation of high-energy acoustics, and especially as more media moves to mobile, many users crank up the volume to try to emulate that intense feeling.

"We set out to make a portable, affordable device that could duplicate that rich experience – it is Woojer’s multisensory effect that makes users feel like they’re right in the action."