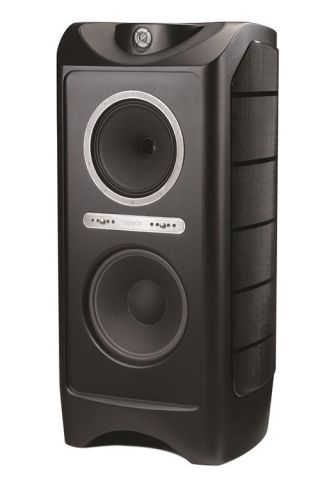 Visitors to CES 2014 will be the first in the world to see Tannoy's new $75,000 Kingdom Royal Carbon Black, claimed to be "the most powerful speaker ever created in the company's 87-year history".

The Kingdom Royal Carbon Black features a 15in multi-fibre bass driver, an all-new 12in Dual Concentric driver that combines an outer bass/midrange section with an ultra-rigid, multi-fibre cone and an edge-wound voice coil with Tannoy's 3in aluminium alloy dome tweeter. The tweeter crosses over at 16kHz to a 1in ceramic-coated, magnesium alloy dome SuperTweeter.

Tannoy will be sharing a room with Cary Audio, and in it will demo two systems. The first pairs the Tannoy Kingdom Royal speakers with Cary Audio's flagship CAD-211FE 150W tube monobloc power amps in a striking red finish, and the partnering SLP-05 tube preamplifier.

As the main source component Cary Audio will use its brand-new DMS-500 DLNA/UPnP Network Audio Streamer which can handle playback of DSD files as well as 32-bit-384kHz ones. It also has aptX Bluetooth streaming, internet radio, coaxial and optical DAC inputs and three USB Type A inputs.