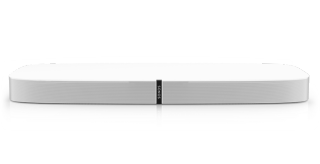 As leaks go, this one looks to be pretty comprehensive. After appearing briefly on US retail website B&H as “coming soon” - though it has since been deleted - the leak was seemingly corroborated by an FCC listing and a set of images posted by Twitter user Jon Maddox (@maddox). If the pictures are genuine, it looks like we’ll be welcoming Sonos’s first soundbase next month.

The Playbase, which B&H listed at $700 (around £560 at current exchange rate, though expect the actual UK retail price to be higher), would appear to be an ideal alternative for those who haven’t the space to accommodate the Playbar, which we awarded five stars a few years ago.

MORE: Which is the best Sonos speaker for you?

From the images posted on Twitter, the PlayBase appears to have the same connections as its soundbar relative; ie. ethernet and optical, but no HDMI. That was one of our few gripes with the PlayBar, though we did conclude that what the set-up lacked in connectivity it made up for with its simplicity.

Sonos announced recently a planned update to include Alexa in existing products, as long as you already have an Amazon Echo or Fire TV device. We expect the PlayBase to be among those to benefit.

For existing Sonos users, the PlayBase will undoubtedly be a coveted addition to their home network. It seems we may have to wait only a few weeks before we can test it for ourselves.