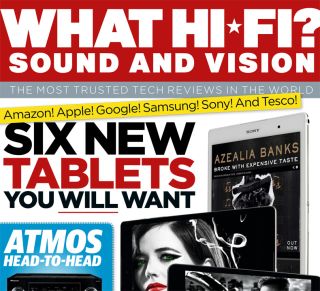 The term phablet first hit the public consciousness with the launch of Samsung's Galaxy Note, but times are a-changing. Not only are we seeing smartphones grow in size, but tablets are shrinking at the same pace with no let up in their performance.

We've taken five of the best tablets with screen sizes between 7.9in and 8.9in – such as the Apple iPad mini 3 and Google Nexus 9 – to see how increased portability has been achieved while taking multimedia performance to a whole new level.

And in addition to those five tablets, we also give the Tesco Hudl 2 a run out - one of this month's First Tests and joining the Mission M3 speaker package, Quad Vena stereo amplifier and Amazon's Fire TV set-top box in making their debut in our testing rooms.

Is that all? Of course not! This month's Supertest is all about soundbars – and it's an incredible seven-way face-off between the high-end products priced between £600-£800 as the never-ending battle to boost your TV's sound rolls on into 2015.

And one of the big home cinema trends of the new year is on show in this issue, with Pioneer and Yamaha AV amps going head-to-head as part of a Dolby Atmos derby – in case you're thinking of adding big screen sound to your home set-up.

Creek Audio's latest stereo amp goes up against not one, not two, but three Award-winning rivals from Naim, Rega and Cyrus in what promises to be a fiercely contested showdown. Which will be the one to come out on top? Our new issue has the answer.

It doesn't end there either. Two giants of the home cinema market – Samsung and Sony – will be flexing their muscles as we review their curved 4K Ultra HD TVs, with 2015 looking as if it may be the year (finally) that this TV tech fulfils its promise.

And the January 2015 issue contains all the usual suspects too. Playlist returns to Sin City with a look at A Dame To Kill For and Insider looks ahead to CES 2015 in Las Vegas with just a handful of weeks to go until the tech show gets underway across the Atlantic.

If that whetted the hi-fi and home cinema appetite, head on down to your local newsagent for the latest issue of What Hi-Fi? Sound and Vision and start your 2015 a little earlier than most with a bang. It's also available in digital form should you prefer to purchase online.

MORE: Subscribe to What Hi-Fi? Sound and Vision online