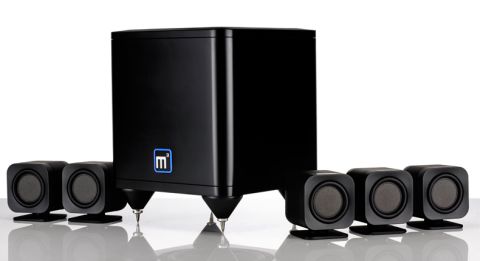 Petite and powerful, but not quite the perfect performance

If it’s a tiny home cinema system you want, the Mission M3 (M-Cubed) is a great solution. We were big fans of the M-Cube (£1000) – it claimed five stars for its style and performance back in 2005 and a decade later, the new and updated Mission M3 once again provides a tempting proposition for those who want a large 5.1 cinema sound, but don’t have enough space for a traditional, boxy-speaker package.

The Mission M3 consists of five dinky satellite speakers (each small enough to fit into the palm of your hand) and an active subwoofer.

While the M3 speakers retain the petite dimensions of the M-Cube (each measures 9cm cubed), there are a couple of design changes that give it a new lease of life.

The biggest update is the use of Balanced Mode Radiator (BMR) driver technology. Each M3 satellite has a 7.6cm BMR driver, which replaces the NXT panels of the previous model. Mission claims that the BMR drivers help deliver a larger spread of sound, as well as being able to receive a full range signal.

The subwoofer consists of a downward-firing 20cm driver powered by 200W of amplification, and mirrors the cuboid design of the satellites; it’s much larger, of course, but still compact enough to be discreetly hidden in a corner.

There are volume, crossover frequency and phase controls on the back panel, and the sub itself is propped on metal spikes. The satellites come with adjustable stands attached, making them easy to place straight out of the box.

If you prefer wall-mounting your speakers, brackets are included as well. Individual satellites are also sold separately for those wanting to create a Dolby Atmos set-up. The speakers themselves are sturdily built, with a soft-touch finish giving a smart, premium-quality look.

The package comes in an all-black finish, although there will be a white version available later in the year.

They might be tiny, but the Mission M3 delivers a surprisingly loud and powerful performance – impressing us with excellent weight and punch in the lower frequencies. There’s a lot of muscle in the bass, with satisfying oomph and wallop to explosions and crashes in Guardians of the Galaxy.

Integration between each speaker is good, and the spread of sound really is impressive. Effects are steered across the room accurately and with a great sense of movement. While it would struggle to fill up a large room, the Mission M3 has no problem filling up smaller, medium-sized rooms with its strong, surprisingly solid sound.

Detail definition is decent, and there’s a smooth quality to the Mission’s sound that’s comfortable to listen to. It’s a well-timed, agile performance, too.

On the flip side, there’s a lack of sparkle to the crunch of shattered glass, while explosions and gunshots don’t have that attack we expect. Dialogue is packed with character, but we sometimes have to strain to hear it over the rest of the frequency range. While we appreciate that the Mission M3 doesn’t veer towards a bright, thin sound, we think the treble is rolled off a bit too much.

This robs the system of clarity, and as a result it doesn’t manage to convey the full excitement and drama of a film. Rivals in this category, such as the new Cambridge Audio Minx S215 system (£500), judges the balance of refinement and clarity just that bit better.

We’re hugely impressed by how muscular and integrated this package is, but it’s a shame it doesn’t have an ounce more clarity and bite to gain that final fifth star.

The Mission M3 remains a likeable and convenient speaker package. It’s a fuss-free system to install and place in your room.