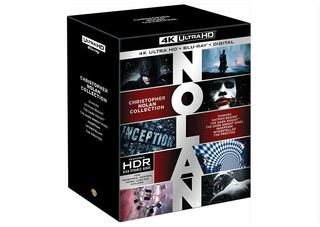 You may want to rethink your Christmas gift plans - Warner Bros. has announced a collection of Christopher Nolan's films in 4K.

Dunkirk had already been announced for the format (Dec 18th) and this announcement includes the aforementioned film as well as The Dark Knight trilogy, The Prestige, Inception and Interstellar. There's no room for Insomnia or Memento, which have been omitted.

Each title will take advantage of High Dynamic Range (HDR) – HDR10 variant, not Dolby Vision – as well as Wide Colour Gamut (WCG), which allows a larger colour space than that afforded by Full HD resolutions. The rumours suggests each title may stick with 5.1 and 7.1 audio mixes instead of object-based surround sound such as Dolby Atmos or DTS:X

As Nolan states, “4K Ultra HD with HDR is an incredibly exciting new home video format that allows a much closer recreation of viewing the original film print".

"The deeper colour palette comes closer to matching the analogue colours of film and we’ve restored the original theatrical mixes for this release. If you can’t rewatch these films in the theater, this is the best experience you can have in your own home.”

The Dark Knight trilogy will get its own boxset, but each title will be available separately featuring a 4K disc, a Blu-ray of the film in HD, a bonus Blu-ray with special features and a digital copy. They'll also be available in 4K HDR from select digital retailers.

Pre-orders have gone live on Zavvi, with TDK trilogy at £40 and individual titles priced at £22.

The Nolan Collection will be out December 18th, perfect stocking filler for film fans this Christmas.

Don't forget Black Friday is just around the corner - as if you could - and you'll be able to keep track of all the best deals on our Best Black Friday deals page.