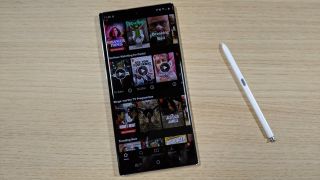 Just announced at Samsung's Unpacked event in New York, the two Note 10 devices — one 6.3in and the other 6.8in — are the slimmest and lightest Galaxy Note phones to date and come with bigger AMOLED screens than ever before.

Thanks to the edge-to-edge Infinity-O Display, first seen on the Galaxy S10, there's virtually no bezel on the side of the new devices and just 1.5mm of unused real estate at the top and bottom of the Galaxy Note 10 phones.

Both phones use the S Pen stylus, which tucks into the bottom of the devices, and has been improved to recognise over 4,000 different grades of pressure.

There's no 5G here, though, with Samsung promising 5G Note 10 phones will launch later in the year.

The more premium Galaxy Note 10+ has a 3040x1440 pixel count with a pixel density of 498ppi. It’s HDR10+ enabled which you’ll be able to enjoy in user video capture as well as while watching Amazon Prime Video.

The Note 10+ dimensions measure 77.2 x 162.3 x 7.9mm, it weighs 196g and it's IP68 certified, meaning that it can handle a dip in fresh water down to 1.5m for half an hour. It’s also covered back and front with Gorilla Glass for further protection.

Sadly, there is no 3.5mm headphone jack in the Note 10+ or the Note 10. Samsung has made the choice to go pure USB-C so that the phones can be as slim as possible. And that marks one of the last big-name phone brands to ditch the traditional headphone jack.

AKG has tuned the audio parts of the devices and supplied a set of compatible in-ear headphones to go in the box but there’s no USB-C-to-3.5mm adaptor included. We were also told that the DAC within the handsets is the same one as used in the Galaxy S10.

Within what Samsung says is the world’s thinnest vapour-cooled chamber sits the improved 7 nanometer CPU and GPU which are backed-up by 12GB RAM and a larger 4300mAh battery which can quick charge to full in 30 minutes. There’s intelligent software to analyse what game you’re playing or app you’re using to streamline processor performance and make the most of that power source.

The spec for the 6.3in Note 10 is a little lower with just 8GB RAM and a 3500mAh battery. It also comes with 256GB of internal storage while the Note 10+ has a 512GB option and a microSD slot expandable up to a further 1TB.

The Samsung Galaxy Note 10+ comes with a 10MP front camera and a quad camera array on the rear which includes an ultra-wide lens, a wide-angle, a telephoto and a depth vision camera too. Between these there are a host of video and photographic functions including live video focus, background defocus for video, and super-steady video optimisation for less bumpy handheld capture. There’s also an amusing AR doodle mode where you can make virtual drawings on your photographic subjects which then track them as they move.

The S Pen stylus keeps its media remote control functions from the Note 9 series and has had Air Action gesture controls for selfies and video capture added too.

Both Note 10 devices come with Samsung 256-bit encryption security, wireless power sharing functionality and Samsung DeX which allows users to dock the device with a monitor screen for a desktop computing experience.

The Galaxy Note 10 phones are available to pre-order immediately and will ship from 23rd August. 5G models will launch at a later date.