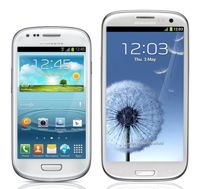 Samsung sold 65m smartphones in the first three month of this year, to maintain its lead in the global smartphone market – and that was with models including the Galaxy S3 and S3 Mini, and well before the Galaxy S4 had even arrived in the shops.

Ahead of the roll-out of its new model, due to go on sale in most markets this weekend and with pre-orders of 10m units in the first two weeks following its launch, the Korean company held a 29.6% global smartphone market share for January-March.

Apple's sales for the quarter were 37.5m units, according to the research from Taiwan-based DRAMeXchange, which says that the Apple iPhone 5 'has been unable to satisfy consumers’ desire for innovation', while exact plans for launch of the next-generation iPhone are hazy enough to cause consumer uncertainty.

DRAMeXchange says that 'Currently, circumstances surrounding the announcement of Apple’s new device are unclear, while Samsung, HTC, Sony, and other global corporations are planning product unveilings for the second quarter, which will likely lead to another dip in Apple’s shipments.'

Seeing off the local competition

It's estimated Samsung sold 11.7m smartphones in China in the last quarter, giving it an 11.7% share, while traditionally strong players in the Chinese market such as Huawei, ZTE and Lenovo saw their sales drop by anything up to 15%.

From 2G phones to LTE base-stations

In related news, Samsung has announced that it's switching production at its plant in Shenzhen, China, from making 2G CDMA mobile phones (now that 3G has become mainstream, and 4G is growing) to building base-stations and repeater systems for 4G/LTE phone systems.

Many of the 600 staff at the existing Shenzhen factory, which had a capacity of 6m handsets a year, will be retained to make the new products.

Samsung signed a deal last summer with Hutchinson 3G UK to provide an LTE network in the UK, and has formed a strategic partnership with Spain's Telefonica to provide a similar network in Latin America.

It announced on April 10 that deal had been made with Hutchinson 3G Ireland, which will see Samsung LTE base-stations coming on stream in Dublin in August ahead of a nationwide roll-out.