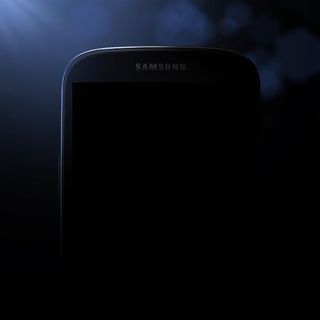 MORE: Samsung Galaxy S4 – everything you need to know

23.56 The Broadway Show style presentation seems to be drawing to an end.

23.54 Samsung S Health. Sounds like a cross between RunKeeper and MiCoach. A GPS fitness app built in to the Galaxy S4. There are Bluetooth accessories, such as the S Band, on the way,

23.52 Samsung Smart Scroll and Smart Pause. Smart Scroll tracks your eyes and then allows you to tilt your screen in order to scroll the web page up and down. Smart Pause stops videos if you look away from the screen and starts again when you turn back.

23.50 Air Gesture allows you to control the web browser without touching the phone.

23.45 Samsung Galaxy S4 has Group Play, which allows you to connect multiple phones and play the same music across all devices. There's Dual Video call, too.

We have all the details right here: Samsung Galaxy S4 official specs and details

23.20 The Samsung Galaxy S4 is official. Well that was quick. We will have all the details and more for you very soon...

23.15 JK Shin, President and Head of Samsung Electronics, is on stage. Following an introduction from a full orchestra...

13.15 The latest Galaxy S4 rumours point to an emphasis on eye-tracking technology. Smart Pause will allow you to stop videos playing when it senses your eyes are looking away from the screen. This leaked video seems to show the Smart Pause in action.

While Floating Touch, looks like a feature that allows you to control your screen without touching it. Ideal for avoiding greasy finger prints. Here's the Floating Touch video.

12.45: Just over 10 hours to go until the launch of the new Galaxy S4 phone at the Samsung Unpacked launch event in New York.

We'll be live from Radio City Hall and will be bringing you all the official news on the new Galaxy S4 as it's released, with the event scheduled to begin at 11pm.

Samsung is set to announce the Samsung Galaxy S4 phone on Thursday at a launch event in New York.

The Galaxy S4 event kicks-off at 7pm New York EST on Thursday evening, so 11pm UK time, and we'll be at the event ready to get a hands-on review of the new flagship Samsung phone.

Samsung revealed its first official picture of the Galaxy S4 today (below), a sneak peak that confirms... well, that it's a phone. There's not much else to be gleaned from the corner on show.

Other pictures and specs have been leaked throughout the last couple of weeks, with suggestions the Galaxy S4 will have a new Eye Scroll eye-tracking feature that can tell where you're looking at the screen or when you've looked away.

Elsewhere, the Samsung Galaxy S4 is rumoured to feature a 4.99in SuperAMOLED full HD screen, 2GB of RAM, a 13-megapixel rear camera capable of shooting 1080p full HD video and run Android 4.2.2 Jelly Bean out of the box.

We'll be covering the event live on this page, keeping you updated with all the pictures, specs, confirmed prices and release dates as they are announced.

And look out for our Samsung Galaxy S4 hands-on review on Thursday evening...

Swot up on the Galaxy S4 rumours and speculation below.

Samsung has confirmed a Galaxy phone event for March 14th, sending out invitations to Samsung Unpacked in New York.

The invite's 'Ready 4 The Show' makes a none-too-subtle reference to the release of the Samsung Galaxy S4.

The launch event, also suggests there will be further events later in the year, suggesting Samsung will launch more than one mobile and possibly more than one Galaxy S, this year.

The Galaxy S IV is rumoured to feature a 4.99in SuperAMOLED full HD screen, 2GB of RAM, a 13-megapixel rear camera capable of shooting 1080p full HD video and run Android 4.2.2 Jelly Bean out of the box.

We're at MWC (Mobile World Congress) this week, which kicked-off today with a Sony press conference for the Xperia Tablet Z, which has now been confirmed for the UK.

Samsung will announce the Galaxy S4 phone, the latest in the hugely successful Galaxy S range, at an event in New York on March 14th.

That's the latest rumour to emerge on what is a bumper day for smartphone news – no surprise with Mobile World Congress (MWC) around the corner.

Set to join the likes of the newly launched LG Optimus G Pro, BlackBerry Z10 and rumoured HTC One, the Galaxy S4 would aim to reclaim the phone top spot for Samsung.

The Galaxy S3 was recently dethroned by the Google Nexus 4, and Samsung will no doubt pull the stops out at a New York launch, as it did in London for the S3, to show it means business.

The new rumour eminates from Eldar Murtazin, founder of a respected Russian mobile website, who tweeted that the event would take place on March 14th in New York.

The Galaxy S IV is rumoured to feature a 4.99in SuperAMOLED full HD screen, 2GB of RAM, a 13-megapixel rear camera capable of shooting 1080p full HD video and run Android 4.2.2 Jelly Bean out of the box.

Samsung features such as Smart Stay and Smart Rotation, as seen on the likes of the Galaxy Note 2, will also no doubt continue on the S4.

The Galaxy S3 release date was May 2012, so while this announcement would be slightly earlier than expected, it could be that the S4 doesn't go on sale until closer to that May date 2013.

There have been plenty of rumours already of course, with Samsung going public to dismiss a February 2013 launch.

Samsung announced huge profits last year, thanks in no small part to the massive success of its mobile division. The Galaxy S4 has plenty riding on it, that's for sure.