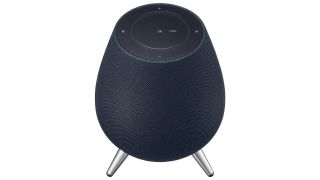 Samsung's smart speaker has been delayed yet again. The Samsung Galaxy Home is now expected to launch sometime in the third quarter of this year, which spans the period from July to September.

Samsung CEO Hyun-suk Kim announced the release date in an interview with The Korea Herald.

“The Galaxy Home speaker, which will be the centre of Samsung’s home appliances, is planned to be launched in mid-second half of the year,” he said. According to other Samsung executives, this refers to the third quarter of the year.

Samsung originally announced the Galaxy Home in August last year alongside the Galaxy Note 9. Another Samsung CEO, DJ Koh, since announced it would ship in April this year, but obviously that didn't happen.

If it does ship in Q3 this year, that would be around a year after it was first announced. Fingers crossed it's worth the wait, then. The forthcoming smart speaker has an uphill battle to climb to get noticed in the crowded market, with the Sonos One and Apple HomePod rightfully dominating with great sound quality and voice control features.

Rather than utilise the popular Google Assistant or Amazon Alexa voice-activated personal assistant for hands-free control, the Galaxy Home will come equipped with Bixby, Samsung's own version.

We can expect the Home to launch with, or be closely followed by, the Galaxy Home Mini, a smaller version of the same device - though Samsung hasn't officially announced that yet.

The firm is expected to announce an exact release date either at the Galaxy Note 10 launch in August or at European tech beano IFA in September.