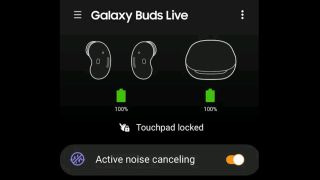 Rumours about Samsung's next-generation true wireless earbuds have been as rife as those on the Galaxy Note 20 phones leading up to their official unveiling on 5th August. Now, thanks to Samsung releasing the companion app on the App Store and Play Store, we now know most of the features of the earbuds, which will almost certainly be called the Galaxy Buds Live.

Both iOS and Android phone users can now see and download the Galaxy Buds Live plug-in app, with the listing's screenshots (below) confirming many of the rumoured specs.

For one, the app shows a toggle for switching 'active noise-cancellation' on and off so ANC will be part of the skillset. That inclusion isn't surprising – Samsung shareholders were apparently upset that ANC wasn't found in the Buds+ at the annual shareholders' meeting earlier this year, and a previous teaser video leak surfaced a 'Keep the noise out. Let the sound in' tagline for the next-gens Buds.

How will the noise-cancellation work with the Buds Live's bean-like, silicone tip-less, ear canal-sitting design? That's yet to be seen.

Next up is 'Find My Earbuds', which as found on the Buds+, allows you track down a missing bud by emitting a noise.

An EQ section in the app allows users to adjust the Buds Live's sound to 'Normal', 'Bass Boost', 'Soft', 'Dynamic', 'Clear' and 'Treble Boost' equalizer settings. There appears to be a choice of which tap gestures you wish to control which playback functions, and it looks like you'll be able to 'lock' them at your request to prevent accidental touches.

The app also displays the battery status of both the earbuds and charging case.

That leaves Samsung to confirm support for Qi wireless charging (as seen in the Buds+) as well as battery life figures, which could well take a hit over the previous model's 11-hour claim due to the power demands of noise-cancellation.

Samsung's official launch next week will also clarify the Galaxy Buds Live price. Previous rumours have suggested an "under $150" (approx £120, AU$219) price tag (according to a report from SamMobile), however a recent tweet by in-form leaker Ishan Agarwal predicts a €189 asking price (approx £170, AU$310) - which is more in-line with the AirPods Pro (£200, $230, AU$350) and other noise-cancelling rivals.