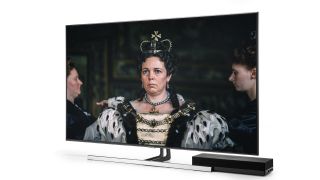 Samsung has closed down some of its LCD production lines in Korea as part of a gradual move towards "large-sized" OLED TV panel production, according to The Elec.

Samsung’s reported OLED operation, which according to industry sources is called ‘C Project’, will eventually see Samsung secure the LCD panels it needs for its LCD and QLED TVs in China only, with production on its home soil focused purely on OLED.

“In its next step, Samsung Display is set to shut down the rest of the Gen-8 lines, along with the 7-2 lines left after switching most of them to produce small and mid-sized OLED panels,” said “sources close to the matter”.

The closing down of the Samsung Display plant in South Chungcheong Province is supposedly to make way for the installation of the necessary equipment, which, the sources also said, is expected in October.

Samsung does currently produce OLED – but only for smartphones. Samsung-made OLED displays (branded 'Super AMOLED') are naturally found in its own handsets (such as the Galaxy S10+) as well as recent Apple iPhones, including the latest iPhone XS and XS Max. The forthcoming iPhone 11 is rumoured to have a Samsung OLED screen too.

It’s been long supposed that Samsung would eventually make an OLED TV comeback following its withdrawal in 2014 due to costs and then-low yield rate. The Korean giant has since chosen to rival the premium technology adopted by LG, Panasonic and Sony by leveraging LCD panels to create QLED  (Quantum dot Light Emitting Diode) TVs. While QLED panels are brighter, more vibrant and longer lasting than their OLED rivals, they generally haven't proved quite as natural- and authentic-looking.

This isn't the first sign of Samsung's potential re-entrance into the market. Last year, it was reported that Samsung was creating an R&D department for a new generation of hybrid Quantum Dot tech and OLED TVs.

It's official! OLED TVs really are good for your eyes