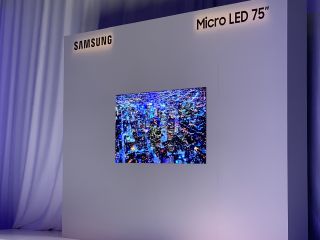 Samsung has used its 2019 CES event to talk not about this year's new QLEDs, but instead to focus on its next-gen Micro LED tech.

Haven't heard of Micro LED before? Here's a quick explainer: Micro LED sets are rather like OLED sets in that they're self-emissive, but rather than using organic compounds, they use tiny, inorganic LEDs - three per pixel. The idea is that they take the best of OLED (perfect blacks, stunning contrast, ultra-thinness) and add extra brightness and greater longevity. It's being toted by many as the next big step in TV evolution.

Now, Samsung, having previously wowed us with its 146in, modular Micro LED 'Wall' prototype this time last year, has just announced two new models - one more consumer-focused, and the other decidedly not.

Let's focus first on the consumer-focused model, a 75in Micro LED display with a traditional 16:9 ratio and 4K resolution.

The display is actually constructed using 64 individual modules arranged in an 8x8 configuration. The 4K resolution and requirement of three LEDs per pixel means there are 25 million of the tiny things across the panel - and getting these aligned and calibrated is apparently a real challenge for manufacturers.

The set is supremely thin and appears to have no bezels (unless Samsung cheated at it’s event and installed the screen in the wall) and so looks incredibly dramatic when mounted.

While this is decidedly a step forward for Micro LED in the home, it's telling that Samsung hasn't revealed a model number, price or release date for the 75in Micro LED TV. If we were betting types, we'd put money on it being 2020 at the earliest that it'll be on sale, and you almost certainly won't be able to afford it.

At the other end of the spectrum, Samsung has announced another version of The Wall - a 219in behemoth.

This is really being used by Samsung as a way to demonstrate the sheer possibilities of its Micro LED tech. The point is that because this is modular technology, it can be used to create displays at huge sizes.

What's more, it can be used to create displays in various shapes. While the 219in Wall is in a traditional 16x9 ratio, Samsung is also demonstrating configurations that are more unusual, such as a super-wide and thin 5x1 ratio.

This modularity might sound a bit pointless when you think of the way we all watch TV now, but Samsung envisages a point in the future when we install displays such as this across entire walls of our lounge, or in strips in the kitchen, or little tiles in the bathroom - and the idea is that they'll be used for more than simply watching TV.

In the shorter-term, The Wall really seems like more of a commercial proposition, but we're very excited about the 75in, more consumer-focused model, particularly as we've seen it in action. Check out our first impression, along with a full explainer on Micro LED, by clicking below.