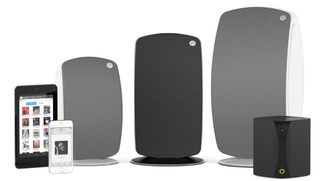 It's actually the second major update to the Jongo system this summer, with Bluetooth Caskeid added to the system in June – allowing the owners of Jongo multiroom speakers to stream tunes from a wide range of apps such as Spotify.

With the Jongo X Series, however, Pure has delivered what it describes as "a fresh look, a new audio profile and a series of features that enhances overall performance" as it looks to continue its growth in the multiroom music marketplace.

As part of its "fresh look", the speaker grille comes with a P in the corner that can be swivelled to either vertical or landscape depending on its orientation. Black speakers boast a graphite grille; white with a new "ice coloured" grille.

Meanwhile, the firm has overhauled the Digital Signal Processor and added dynamic equalisation in a bid to improve the sound. Set up has also been made easier – including a new set-up process through the Pure Connect app.

And Pure has now introduced smart session management to the system, which will take you back to a previous session, pick up from where you were last listening and not lose the speaker grouping, even if your wi-fi connection is broken.

The new Jongo X Series comprises the S3X portable wireless speaker (£130) and the T2X (£99), T4X (£150) and T6X (£200, pictured) wireless speakers. Due to go on sale in October, existing Jongo owners will be able to benefit from the improvements via a software update.