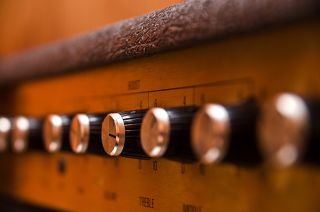 The sound of live sits at the heart of DALI’s philosophy. After all, why would you want to hear a boxy mumble over the kind of performance that blows your hair back and gives you goosebumps? And because the new Opticon range is winging its way over to the UK for an exclusive event, we thought we’d take a look back at some of the greatest performances ever committed to tape.

Prior to the 1940s, of course, the overwhelming majority of recordings were ‘first take’ – the technology didn’t exist to make multiple takes either easy or remotely affordable. Mess up a recording and that’s that, new lacquer and once more from the top. And once re-recording and overdubbing became commonplace, it became desirable to spend as long committing one’s artistic vision to tape as one could get away with. But you can’t bottle lightning/should trust your instincts/leave well enough alone every now and then. Sometimes magic visits but fleetingly, and when it does you’d better have that tape rolling.

Here are five songs that could only have worked first time…

The Beatles needed to record 10 more songs for their debut album Please Please Me – they would be added to the four already recorded as their first two singles. Producer George Martin booked morning and afternoon sessions at EMI’s Abbey Road Studios (in the end an evening session was added too, even though Martin’s budget was tight and the entire day ended up costing almost £400), and on Monday 11th February 1963 (at 10am sharp) The Beatles began working their way through what was basically their live set.

By 10.40pm they were ready to record their version of The Isley Brothers’ version of Twist and Shout – George Martin knew they only had one shot, and not only because it was nearly knocking-off time. John Lennon’s throat was sore thanks to both 12 hours in the studio and his customary head-cold, so he basically sang, screamed and shouted his way through the song on its first take. They had another pass at the song immediately afterwards, but take two was quickly discarded.

And the next day the band played two shows, one in Oldham and one in Sheffield.

Convinced by the audience’s reaction to the song as they toured the UK supporting Chuck Berry, The Animals decided they needed to record House of the Rising Sun pronto. So during the middle of the tour, the band hopped on the milk train to London after a show in Manchester (or perhaps Blackpool – some details are hazy) and arrived in De Lane Lea Studios in Kingsway at 11.30am on May 18th 1964.

By lunchtime, the song was recorded – one take was all it took. And despite the subject matter and an initial BBC ban, it made Number One in the UK and in America. Not in the first take form, mind you. The take was almost four and a half minutes long, way too long for a single, so the record company carved almost a minute out of it.

Famously misinterpreted (not least by Ronald Reagan), Born in the USA was originally a voice-and-acoustic-guitar song that was recorded in January 1982 for Springsteen’s upcoming Nebraska album.

It was felt the song didn’t fit the rest of the Nebraska material, though, and was shelved until Springsteen revived it later in 1982 and recorded it in a full E Street Band arrangement. The arrangement was made up on the spot, with each member of the band adding their improvised part with the original acoustic recording acting as the ‘guide’.

Once every contribution (including vocal) had been recorded, the band had another pass at the song as an ensemble. And it’s this take, of a song still not formally arranged, that constituted the title track of Springsteen’s enormo-selling 1984 album.

Radiohead wrote No Surprises in August 1995 while supporting REM on the American band’s Monster world tour, and it was the first song they attempted on the first day of sessions for 1997’s OK Computer album. And despite recording, according to vocalist Thom Yorke, “endless versions afterwards”, it’s the first take that appears on the finished album. “They [the subsequent versions] were all just covers of the first version. So we gave up and went back to the original.”

The Decemberists – The Mariner’s Revenge Song (2005)

2005’s Picaresque (The Decemberists’ third album) was recorded in the summer of 2004 in Prescott Church in the band’s home town of Portland, Oregon. The Mariner’s Revenge Song, a tale as salty as the title suggests and a live favourite ever since the album was released, was recorded not only in one take but around one microphone, with each member of the band controlling their position in the mix by the simple expedient of stepping closer to or further away from the mic.

There is a frankly over-exhaustive examination of the band’s recording techniques on the otherwise-excellent The Decemberists: A Practical Handbook DVD.

You can get your eyes and ears around the new DALI Opticon speakers at the DALI: Live from London event. It’s being hosted at the amazing Hospital Club in Covent Garden, and live on whathifi.com. Stay tuned…