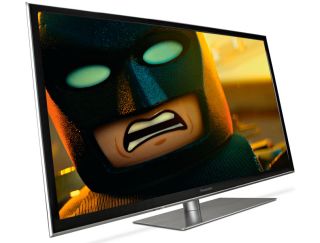 In the battle to deliver the most headline-grabbing TV this year, both LG and Samsung have both released 105in curved 5K TVs (yes, 5K... and it's not stopping there, when you read on). And it's not just pie-in-the-sky: these TVs are available to purchase in South Korea and the US respectively.

With these state-of-the-art sets breaking cover in the consumer market and pushing TV tech further, it very much looks as if the trusty TV won't be going anywhere soon. But just where exactly are these advances taking us, and are there any serious challenges to the TV's future?

The first thing worth noting is that our appetite for large screens and higher resolutions is on the increase. According to research published by Thinkbox earlier this year, 98.5 per cent of all TV viewing was done through a traditional set last year. The remaining viewing was done through devices like laptops and tablets, with that figure up 0.3 per cent on the year before. It sounds like a pretty convincing victory for the traditional set, leaving non-TV set screens still with much to do.

MORE: 98 per cent of UK TV viewing still takes place on a television

There has also been a growing trend for bigger screens in our living rooms, with 16 per cent of TV sets purchased in the UK coming in at over 43in last year according to the Telescope 2014 report (.pdf) – that's a four per cent increase on 2012. In total, seven out of every 10 TVs bought during 2013 could be classed as big, or more than 26in in size.

And those screens are changing too. Plasma has fallen by the wayside to such an extent that LG looks as if its preparing to kick the technology into the long grass - worrying news for plasma advocates, with LG regarded as the one last remaining manufacturer of plasma screens. OLED has gone a little quiet too, leaving LCD/LED as the driving technology in recent months - but is OLED about to come storming back?

There's also the question of curves - designs which may not exactly be best suited to the living room, even if they do promise a much more immersive experience.

Futuresource Consulting reported a "weak performance" from the international TV set market last year, but it's now expected to return to growth this year – and 4K looks as if it'll have a significant impact.

Additional research from BI Intelligence has explored the growth of 4K TV and its adoption over the coming years, with encouraging results as far as the industry is concerned. Not only is it expected that 4K-ready sets will exist in a tenth of all North American households by the end of 2018 - and in half by the end of 2024 - but prices are coming down... and fast! In fact, the average cost of a 4K TV has dropped 85 per cent globally in just two years.

The availability of content remains an issue, but it's not for the want of trying. The BBC has explored two methods of broadcasting live 4K content – both via the digital terrestrial network and internet protocol (IP) – and Japan started a trial broadcast to households via a satellite connection in June, all geared towards understanding how the Ultra HD pictures can be distributed. Netflix, Amazon and YouTube, of course, are pushing 4K too.

If you're still getting used to the idea of 4K TV, you might be thinking that the idea of 5K, as mentioned above, is getting a little ahead of things. But there doesn't seem to be any holding back when it comes to just how sharp the resolution could be on our TVs in the not-too-distant future - not if the first signs of 8K TV are anything to go by.

Japanese public broadcaster NHK is already forging ahead with the development of high-frame rate resolution and 8K - 16 times the resolution of existing HD TV - is on its agenda. According to Broadband TV News, NHK is hoping to achieve an "end-to-end high-frame rate system" that delivers 8K resolution (7680 x 4320 pixels) at 120-frames-per-second - something that will no doubt really ramp up that immersive experience.

Audiences in Japan might not be waiting too long for the first implementation of 8K broadcasting if reports are to be believed. Test satellite broadcasting could begin as soon as 2018 and the launch of public services could be as near as 2020. We'll be watching very closely (not literally, it'd probably hurt our eyes) to see how 8K develops going forward.

But we have already had our own first taste of 8K TV, with LG bringing the technology to European shores with the demonstration of its 8K-ready TV at IFA 2014 in Berlin (pictured).

In search of another dimension

The football World Cup was used as a test for TV tech innovations in previous years, and 2014 was no different with 4K. But 3D was noticeable by its absence, having been lauded ahead of the 2010 World Cup, and with the BBC and ESPN dropping their 3D coverage in the last number of years, does that mean 3D has been consigned to the scrapheap already?

No, is the short answer. In fact, Futuresource said the UK appetite for 3D is – at worst – "polarised". That's because Virgin has continued to commit to 3D services, and while BSkyB hasn't abandoned the technology, it has pulled its 3D football coverage. This could well have an impact, but with a predicted 166 per cent increase in global 3D TV sales by 2017, more enabled sets might well mean more content. That said, we think 3D TV looks to remain a niche interest for the foreseeable future.

Sweet streams are made by TVs

One more growth area that could ensure the TV's place in our living room for years to come is Smart – or internet-connected – sets, sales of which accounted for 39 per cent last year (Source: Futuresource). This is expected to rise to 87 per cent by 2018, and Thinkbox believes this could drive some on-demand viewing from tablets, laptops etc. back onto the TV set.

Meanwhile, Google's Chromecast and Roku's streaming dongle are just two examples of devices that plug into your HD TV and offer the on-demand services that people want most. Services such as Netflix might well be changing how we watch TV, but that need not mean it changes what we watch content on. Our appetite for larger screens is a key factor - we can enjoy better clarity, better sound and a more immersive viewing experience than we are likely to on, say, a tablet.

The TV sector has taken great strides to futureproof itself against changing viewing habits and rival technologies, but it doesn't mean it's completely safe from being toppled. According to TV Licensing's Telescope 2014 report, more than half of tablet owners watch TV content on their device; one-in-three UK consumers owns a tablet, and that's expected to rise to more than half by 2017.

It's possible to argue that an increase in tablet ownership means "the number of people using tablets to watch TV is likely to increase" as well, but that remains to be seen. One way in which this could be facilitated is through 4G broadcasting, another innovation trialled by the BBC recently – along with Nokia Networks, working with European firms and using a Bavarian broadcaster.

Instead of streaming video content to your smartphone or tablet using your standard mobile network and data plan, the BBC explains that it'd involve transmitting a single broadcast of that data that you connect to – rather than users having an individual 4G connection. It's designed to reduce congestion on networks and deliver a consistent picture without the spinning circle of buffering doom.

The future is bright...

4G broadcasting is still in its infancy as a technique, but the UK's expanding infrastructure could make it a very real possibility. It'll no doubt benefit those who need something to fill the time while on the move, for example. But it's difficult to see it ending our love affair with the traditional TV; something that's been with us for most of the 20th century and is determined to stick around into the 21st too.

And the industry is resolute. If the latest White Paper (.pdf) from the Digital TV Group is a useful gauge, relevant stakeholders from the UK's TV sector - from broadcasters to content producers, service providers, government, consumer bodies and more - are all engaged in exploring the new and emerging TV tech and how they can be implemented to the benefit of British households in the future.

If nothing else, it seems we prefer our video content on a large screen – something that tablets, smartphones and other devices can't match. Mobile devices have given us another means of watching content, but these complement – rather than challenge – our TV's role in the home. Bigger, smarter, more pixels, curved, 4K, 5K, 8K... the future of TV is interesting to say the very least.

Do not adjust your set – the reports of TV's death might just be somewhat exaggerated.