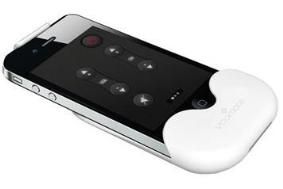 The new device, due in the shops by the end of the year, follows on from the company's existing iPod Touch/iPhone remote systems for PCs and Macs, and is expected to sell for around $69 (£45).

It claims compatibility with 98% of devices straight from the box, with the remaining 2% covered by a learning function, and combines a wraparound hardware unit with a downloadable app.

As well as offering control of single devices, it also allows extensive customisation, allowing whole sequences of commands to be programmed, then triggered with a single tap. zero1.tv CEO Alexander Gruber says that 'An almost infinite number of devices can be controlled on the large touch-screen.'

The VooMote ONE, which is compatible with all iPod Touch models and both iPhone 3/3GS and iPhone 4, can be preordered on the company's website from September 3rd.