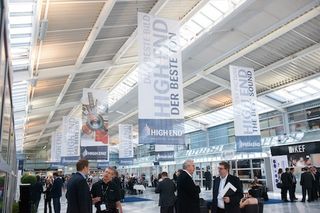 The dust has settled after the annual High End Show, organised in Munich by Germany's High End Society – and while the weather was ropey, at least making it cooler in the glass-roofed halls, and it felt less crammed than in past years (even though numbers were up), high-end audio seemed in pretty good health, whether played from LP or streamed from laptop.

A change for visitors on the trade day was the traditional alphorn greeting, but this year provided not by the leather-shorted blasters we're used to, but the all-female Werdenfelser Alphornbläserinnen, not just Germany's only all-female alphorn ensemble, but apparently known in the Bavarian music scene as the Spice Girls of the Alps. So now you know!

Straight into the show, and I was immediately confronted by the massive Pivetta Opera Only amplifier, looking even more imposing 'in the flesh' than the early press pictures suggested.

Designer Andrea Pivetta was on hand to demonstrate the amplifier, opening and closing its huge panels to reveal the inner workings, even if a sign within suggested not all components were finalised and this is still very much a work in progress.

Almost comical to see this massive amplifier driving a pair of modest florrstanding speakers, which it dwarfed, and definitely unsettling to hear it schmoozing its way through some Michael Bublé. But worth sticking around to clock the 'What the…?' expressions on the faces of passers-by, most of whom had seen and heard everything in the high-end world, but were still stopped in their tracks.

Even more alien-looking were these steel and aluminium Elite One speakers from Italy's Nime Audio Design, complete with ceramic mid-bass driver and tweeter. Apparently the design allows this speaker to 'magnify and furtherly embellish the environment', but I have to say I just kept thinking 'alien with a capital A'.

Also from Italy, but at the opposite end of the spectrum, were The Varios, a range of cartoonish speakers made in Rome, complete with anthropomorphic styling and – of course – tweeters in the shape of little birds sitting atop the main enclosures. And a subwoofer called Roy.

The smaller JR and SR versions use a full-range bamboo cone driver with neodymium magnet, and the two speakers are naturally called Vincent and Lola, while the larger MRT combines a polypropylene cone with a ferrite/neodymium magnet, with that little tweeter, called Tito, on top. Roy, meanwhile, uses two drivers in push/pull configuration, and all the speakers have solid wood enclosures, and use high-quality components.

And just in case you think I've finally flipped, here's confirmation: having spent some time listening to the speakers and talking to the guys from the company, it's clear that lurking behind the quirky styling is a range of very serious loudspeakers, and not just some novelty product.

Much more sensible, but no less fun, was the new fact.12 floorstanding speaker from PMC, which is gradually running out its 'i' series models in favour of the twenty and fact models.

The company played it simple with just the new speakers on demonstration in a well set-up room, and showed that while the new fact flagship may be appreciably slimmer than the likes of the OB1i, it can still turn on the thrills while delivering a sweet, clean midband from the new scaled-down version of the company's famous 7.5cm dome drive unit.

PMC's Tom Barron played me a few tracks, then let me loose with the trusty USB stick – it's the new wallet full of CDs, you know – to try some of my own music, and what I heard showed definite promise. In fact, though I gather there's still some last-minute fettling to be done before the speakers go on sale, they sounded pretty much done and dusted to me.

Done and dusted a long time ago, and now cleaned up, lovingly restored and sounding lovely were the massive speakers being played by Silbatone Acoustics in its always-entertaining room.

'This year's model' was a pair built around Western Electric compression drivers made for less than two years starting in 1936, and driven by just a handful of valve-powered Watts each side.

It was explained that each of the arrays being used was designed to fill an auditorium of 1500 people, so in the room where it was demonstrated to about 50 people, the system was probably well within its operating limits.

Also retro – well, at least in spirit – was the 'wall of sound' rig set up by new McIntosh owner Fine Sounds in tribute to the famous Grateful Dead rig of legend, which also used McIntosh amplifiers. OK, so it wasn't quite on the same scale as the original, but if it was designed to draw a crowd, it was certainly doing the job. Playing Santana as I arrived, playing AC/DC when I left.

Also going for crowd-grabbing was the Onix system, making great play of its British heritage but sounding more than a little overcooked in the Munich demo room, as if the loudness was working at full chat to boost the treble and bass. Striking, yes, but not how I remember old Onix products sounding.

A new brand to me was Nubert, although it's been around for over 35 years, becoming a huge company direct-selling a wide range of speakers mainly in Germany and Austria. Nubi, its cute little mascot, was standing on many of the speakers on display, among which were some interesting-looking active monitors, part of the company's NuPro professional range.

Prices start from about €285 each, and the company also has a range of wireless senders, able to work with up to eight of the speakers.

But then streaming and computer audio playback was everywhere, and I was rather taken with the Soledge Canto system from France, which comprises a sleek Maestro server, complete with a powered screen set in motion by a proximity sensor, and feeding Tenor receiver/amplifiers to drive the speakers.

Rather more affordable is the little HiFace DAC from M2Tech, which is the latest in a line of USB stick devices from a company also known for high-end mains-powered units such as the Young DAC, which sells for around £1200, has asynchronous USB working, and can handle content up to 32-bit/384kHz, should you want it.

The bright orange HiFace DAC, by contrast, will sell for €200, according to M2Tech's Marco Manunta, who pressed a review sample into my hand – and has asynchronous USB and 32-bit/384kHz capability.

It's designed as a DAC rather than a headphone amp, but will just about drive some easy headphone loads, and now I think I've just about recovered from the show I'm looking forward to giving it a try in my system at home.

(And now I have, want to know how it sounds?)