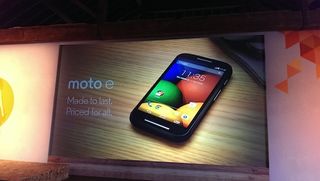 Motorola has officially unveiled the Moto E budget smartphone, confirming many recent rumours. Rather than act as a successor to the Moto G, the Moto E (above, left) will be a new entry-level device for Motorola.

Also announced at the event in London was a new Moto G with 4G (above, right), an update to last year's model.

The Moto E has a 4.3-inch display, is slightly smaller than the Moto G and boasts a resolution of 960 x 540, giving 256ppi, which Motorola claims is the sharpest in its class. It also comes with a 1.2GHz dual-core Snapdragon 200 processor with 1GB of RAM.

Other specs include 4GB of internal storage, a microSD slot which can support up to 32GB more memory, a 5MP rear camera and a 1980mAh battery which Motorola claims will comfortably last a day.

The Moto E will come with a new feature called Motorola Alert. This is made up of several individual features.

The first is Location Status, which allows you to send a chosen contact your location. Meet Me/Follow Me meanwhile allows users to send their location with a message, while Emergency Mode can dial a predetermined number in case of an emergency.

A range of customisation options will be avaible, too: 9 interchangeable rear panels and 5 rubberised grip cases.

The Moto E will be available soon for just £89 unlocked.

The updated Moto G with 4G now comes with the added benefit of 4G connectivity and a micro SD card slot. This will be available in the next few weeks for £149.

The Moto G has quickly become the best-selling smartphone in the history of Motorola in just five months. Available in 44 countries, Motorola says the phone now represents over 16% of the prepaid smartphone market, and 6% of total UK smarphone market.