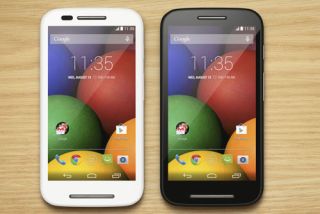 Packing some decent looking specs for the money, the Moto E could well be the budget Android phone of choice for many looking to make their first venture into smartphone territory.

We took it for a spin to get our quick hands-on review first impressions.

Motorola has stuck with its tried and tested formula of minimalist styling, also found on the Moto G and Moto X.

It has a slightly larger bezel than the flagship Moto X, but even so it doesn't intrude too much on the screen. Tiny by current flagship proportions, the Moto E is comfortable to hold and one-handed use is a breeze.

On top you'll find a headphone jack, with power and volume keys on the right, which is all very familiar.

The demonstration model we saw was wrapped in one of the five optional grip cases and so power and volume keys protruded slightly to assist with use.

A range of nine swappable back covers are also on offer. Motorola has been keen to extend the customisation options found on the Moto X down to the budget end of its line-up, which is good to see.

With it being a budget smartphone, don't expect the Moto E to compete with the high-end Android phones from the likes of HTC, Samsung and Sony. In fact, Motorola has indicated its main competition is the Samsung Galaxy Fame.

The 4.3in Moto E screen has a 960x540 resolution which delivers 256ppi. Motorola claims this is the sharpest in its class.

First impressions are good. Considering the size and price, the screen is perfectly readable and should be more than adequate for the average customer looking for a small, budget device.

We've yet to view any sort of video footage, so can't comment too much on blacks or contrast levels, but what was apparent was that viewing angles weren't brilliant. When tilted to the side, a blue hue came over the screen, which is far from ideal.

Storage is in the form of a 4GB internal memory but crucially there's also a microSD card slot allowing for memory expansion up to 32GB. Motorola has said that media files and Google Play apps can be stored on cards on all its phones.

Motorola claims in most typical scenarios, the Moto E is in fact quicker than the Samsung Galaxy S4, including launching the broswer and the camera. We shall see if that holds up when we come to our full review.

Unfortunately, the Moto E doesn't come with the intuitive Active Display or Touchless Controls found on the Motorola Moto X. It does however come with something called Motorola Alert.

It's a piece of software designed to let your family and friends know where you are, what you're doing and if you're ever in trouble. It seems like it could be genuinely useful, but we'll have to wait until a full review to see how well it works in practice.

Our first impressions of the Motorola Moto E are good. For just £89 Motorola has provided an awful lot for the money, managing to avoid a sub-standard spec sheet in the effort to hit such an affordable price.

If you're looking to venture onto the smartphone scene but don't want to spend too much, this is one for the shortlist. Look out for a full Moto E review very soon.

See all our Android smartphone and tablet reviews