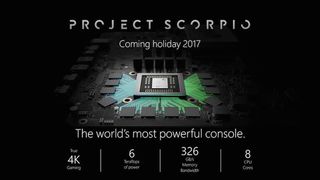 In an exclusive reveal by Digital Foundry, Microsoft has lifted the lid on Project Scorpio's specifications - and there's plenty of news to digest on the video and audio front.

AV enthusiasts will be buoyed by the presence of a 4K Ultra HD Blu-ray drive and support for HDR content - Scorpio is set to support native 4K gaming and will sport an HDMI 2.0 output (some reports state it will support the very latest HDMI 2.1 spec), which is necessary to support 4K HDR video, an expanded colour gamut and high frame rates.

It appears Scorpio will keep the HDMI input found on Microsoft's current Xbox One and One S consoles, although whether it will support 4K pass-through remains to be seen.

The article claims Scorpio uses the same audio processor as the Xbox One but brings added functionality, including "spatial surround."

This includes Dolby Atmos support, a feature recently rolled out for the Xbox One and One S. Scorpio will support Atmos for gaming (we're assuming movies are also included) and for headphones.

Microsoft also said Scorpio will support a proprietary audio format called HRTF, which has been developed by the company's HoloLens team (HoloLens is a device designed by Microsoft to allow holographic computing).

It's unclear how you'll be able to experience this new format, but the article does note any audio upgrades should also be made available for the Xbox One and One S.

The headline numbers for Project Scorpio include a six-teraflop GPU, 12GB of high-speed GDDR5 RAM, a custom eight-core CPU and a 1TB hard drive. You can also add an integrated power supply, and "state-of-the-art cooling" to the list.

There's no word on what the new console will look like or how much it will cost. All is likely to be revealed at the E3 Entertainment Expo in June.