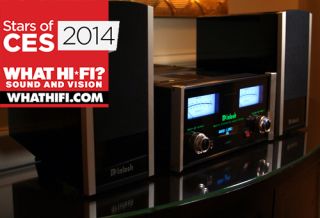 Legendary US hi-fi company McIntosh has unveiled a trio of new products at CES 2014, and also given us a glimpse of its first pair of prototype headphones.

On the electronics front, there's a new music streamer, the MB100 Media Bridge, a relatively compact (by McIntosh standards) headphone amp, the MHA100, and a new integrated audio system, the MXA70 (above).

Both the MHA100 and MXA70 share the same casework and physical design, but the latter includes a specially designed pair of two-way speakers. The all-in-one system packs a 50W stereo amp and incorporates the same headphone amp found in the MHA100.

There's no CD player, rather it's designed to be used with a variety of digital sources such as a computer, Sonos system or hard drive. And to that end it has an asynchronous USB input, plus analogue, AES/EBU, optical and coaxial inputs. It costs $6000 with speakers and ships in June.

The MHA100 is McIntosh's first dedicated headphone amp. It has four digital inputs to allow playback of music files in a wide variety of formats, while the headphone section uses McIntosh-designed and hand-wound impedance matching Autoformers to deliver "full McIntosh power" into any set of headphones.

It also features a 50W stereo speaker output if you want to use it with speakers rather than headphones. The unit will ship in the US in June for $4500.

McIntosh has also revealed that it is developing its own headphone range to go with the MHA100. Shown in prototype form at the show were the flagship MHP1000 over-ear headphones that will go on sale in the first half of 2014 for around $2000. More affordable models will be added to the range in due course.

For those who want to add a full-blown media streamer to their system, McIntosh has developed the MB100 Media Bridge with built-in hard drive. This full-size component allows users to connect digital sources via the USB or network ports and stream content at up to 24-bit/192kHz resolution. They can also stream music directly from their wireless devices such as smartphones and tablets.

Built-in streaming services within the MB100 include Pandora, Sirius XM, Spotify, Rhapsody, Last.fm and TuneIn, and there's cloud access for back-up and synchronisation across multiple systems.

Control is via an iOS or Android app, web browser, TV user interface or the front-panel display. The Media Bridge is due on sale in the US in Q2 for $6500.