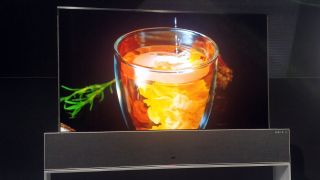 Today's the biggest day for CES announcements, and LG has rewarded early risers attending its 8am press conference by unveiling not only its first 8K OLED TV (the Z9) but also its first rollable TV, the Signature OLED TV R.

Who'd have thought that a 8K TV announcement would be outdone, eh?

The Signature OLED TV R (model number: 65R9), in LG's words, 'rolls out the future' of TV, with a 65in screen that can fully retract into its aluminium base, which doubles as a 4.2-channel, 100-watt, Dolby Atmos soundbar.

The concept has been long rumoured, and is a natural progression of LG's renowned Wallpaper TV.

We're eager to learn more about – and get a proper look at! – the Signature OLED TV R, but for now here's what we know...

The rollable TV offers several different viewing modes, from fully retracted ('Zero View') to fully visible for TV watching (Full View). When rolled most of the way down, the 'Line View' offers a horizontal display so the owner can see and access music playback, a clock and the TV's home dashboard. There are also more aesthetically concerned 'mood' and 'frame' modes.

So how many organs will you have to sell to get one? Unsurprisingly, pricing hasn't been announced. Considering LG's several thousands pounds, we wouldn't be surprised if a five-figure price tag was hung on the innovative Signature OLED TV R.

The 88in Z9 8K OLED TV, meanwhile, is the company's largest consumer-ready OLED TV yet, and with 33 million pixels ushers in the next-gen resolution that has been stealing headlines for the last twelve months.

LG revealed several details about its forthcoming 2019 OLED and LCD TVs just a few days ago. Below is everything we know so far...

The Z9 will be powered by the α9 Gen 2 processor that LG announced just before Christmas. It’s the second-generation processor of the one found in LG’s 2018 OLED TVs, and will be paired in the 2019 TVs with a new-and-improved 'deep learning' algorithm to deliver enhanced picture quality. The TV can determine what needs adjusting in real-time based on the content being displayed.

LG explains that the α9 Gen 2 is capable of improved brightness by adjusting its tone mapping in accordance with the ambient conditions, measured by the TVs’ light sensors.

The new processor can further refine HDR content by adjusting the brightness to transform even the darkest scenes into ones with incredible contrast, detail and depth of color, even in brightly-lit rooms. leveraging Dolby’s latest imaging innovation which intelligently adjusts Dolby Vision content, LG TVs deliver a compelling HDR experience under varying ambient light.

The α9 Gen 2 is also employed in LG’s 4K OLED line-up, which conforms to the brand’s typical order, with the W9, E9 and C9 series. There’s no mention of the usual middle-sitting G series TV, however, so we can guess its been scrapped.

We hope the entry-level B series OLED – also unmentioned so far – will return for 2019, and we can expect it to have an older (first-gen 2018 a9) processor.

8K isn’t exclusive to OLED, either, as LG has leaked details of its new and 'best ever' LCD TVs too.

Its new flagship 75in 8K LCD TV (model name: SM99) will sport a panel with the superior resolution. Below it will sit the premium SM9X and SM8X series, which come under a new ‘NanoCell TV’ umbrella - a name LG thinks better represents the NanoCell technology behind them. ‘NanoColor’, ‘NanoAccuracy’ and ‘NanoBezel’, LG says, reflect the sets’ colour accuracy, wide viewing angle and narrow bezel.

As we can expect from most manufacturer’s 2019 TVs, HDMI 2.1 ports will feature on all 2019 OLED TVs and some NanoCell TVs, bringing support for high frame rate (HFR) at 120 frames per second for improved rendering of on-screen action (great news for gamers), as well as for enhanced audio return channel (eARC), allowing up to 32 channels of audio, including eight-channel, 24-bit/192kHz uncompressed data streams at speeds of up to 38Mbps to be transferred between kit over HDMI.

LG integrated Google Assistant into its 2018 TV line-up, and it remains a feature of its 2019 models. But the upcoming TVs will also offer voice control via Amazon Alexa. A Home Dashboard that LG says will be an intuitive hub to control your smart home ecosystem from.

In other big news, LG is also integrating AirPlay 2 support into its TVs for the first time, so Apple device users will be able to stream audio and video (including from iTunes) to their 2019 LG TV with a touch of a button.

As for the sound, Dolby Atmos returns to the flagship sets, and a new algorithm also works to up-mix stereo audio to deliver virtual 5.1 surround sound. LG is introducing a sound mode that works to optimise audio performance based on the TV's placement in a room.

And that's a wrap. Impressive. As expected, further model and pricing information will follow in the coming weeks. Our imminent hands-on review of the rollable OLED TV and 8K OLED TV will be much more imminent...