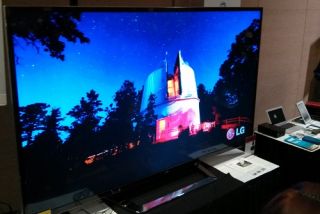 LG kicked-off a day of press conferences at CES by focusing on 'Smart Life' technologies, its new 4K Ultra HD TVs and confirming its commitment to OLED TV.

As we reported yesterday, LG announced two new Ultra HD 4K TVs, in 55 and 65in screen sizes, joining the 84in Ultra HD released at the end of last year, though no word on a UK release date for the smaller sizes.

LG was also bullish about its OLED TVs, offically launching its existing range, which are on sale already in Korea, and promising new models.

And if that wasn't enough future technology, LG also confirmed it will be exhibiting a 100in Laser TV, due on sale in Korea later this year.

Elsehwhere there was talk of new technologies to enhance your 'Smart Life', with NFC connectivity across all devices and new gesture, voice and remote control.

LG's One Touch Connection promises to make streaming between smartphone and TVs easy, using NFC to allow two devices to connect by simply touching them together.

LG also launched a new Magic Remote, with voice and gesture controls joined by Point & Click control. This claims to allow you to control your TV using a solitary finger, if last year's gesture controls were a little too strenuous for you.

The new Magic Remote also allows you to simply write channel numbers in the air in order to change channel. Whether you'll have to write them in reverse so your TV can read them wasn't mentioned...

Details on new LG Smart TVs for 2013 were thin on the ground but the headlines promise up to seven new Google TV sets in five screen sizes, seven series of Cinema 3D screens, with 21 TVs in total.

All LG's TVs for 2013 will be LED, with no more CCFL screens, while plasma TVs will also continue with three screen sizes and three model ranges.

LG is also promising to make TV sound quality a focus for 2013, with models from 47 to 84in in screen size sporting built-in subwoofers, while LG will also offer 2.1 speaker systems.

We look forward to seeing whether the new ranges of flat TVs do indeed improved on the existing, inevitably average sounding, HD TVs.

There will also be new LG Blu-ray players, with all models supporting smart TV and 3D, and some coming with the new LG Magic Remote.

Despite finding it tough to compete with the likes of Samsung, LG was eager to talk up the success of its 2012 phones such as the Optimus 4X HD and of course the Google Nexus 4, which was built with LG.

LG teased that new 'Super Phones' would be released this year, promising ZeroGap Touch technology and increased battery life.... but not until Mobile World Congress in March later this year.

The Optimus G was confirmed, now leading LG's line-up of smartphones, while the Optmiuis Vu 5in 'phablet' was again mentioned in dispatches, though it hasn't made it to the UK as yet.