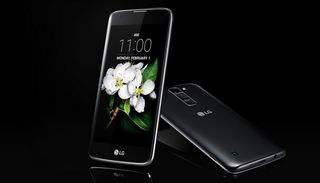 Other than TVs (and fridges), we were left with a new K Series of smartphones - a mid-tier series aimed at a younger audience.

It's joined by the K7, which has a 5in screen alongside a slightly lower spec all round. So far, so midrange.

Some of LG's camera tech features are on the new phones, including Gesture Shot and 'Flash for Selfie'.

The phones, with their glossy 'pebble design', are due to be "affordably priced", claims LG.