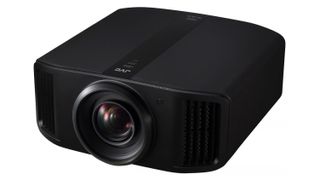 Most projectors that bill themselves as 4K (especially the more affordable ones) are what the industry calls faux-4K rather than true 4K, using pixel-shifting methods as opposed to expensive 4K-resolution chips to beam a 4K image.

True 4K models are, even today, far and few between and still carry price tags greater than most 4K TVs.

It's not wholly surprising, then, that the first 8K projector we've seen flies the faux flag, although 'true' or not, we can't deny our wilful anticipation of 8K projection's potential.

A HDR auto tone-mapping feature uses the content’s metadata to continuously adjust the image, too.

Meanwhile, the native 4K models, the DLA-N7 and the DLA-N5 (which join the mightily impressive, albeit sky-high expensive, DLA-Z1 as the only true 4K models in JVC’s home projector line-up) use the same 4K chips but omit the 8K e-shift processing.

They also match their sibling for HDR support and 100 per cent DCI P3 colour space coverage, and both utilise a new 65mm all-glass lens.

All three models are in the process of receiving THX certification, too.

Can they take on Sony's cluster of class-leading 4K projectors? We look forward to finding out...