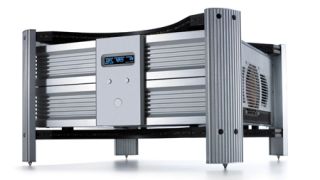 This extraordinary device may look like something that's just landed on the surface of Mars, but in fact it's the IsoTek Genesis. Cost? £12,995.

So what, you may ask, is it? Well it's the first dual-cell mains generation device for high-performance audio systems. Instead of filtering the mains supply using a conventional mains filter, it's designed to create a fully optimised sine wave from scratch.

A low distortion, synchronous sine wave generator creates a fully optimised signal inside each cell, which is amplified by a 300W generation engine running in Class A/B and fed to a high-quality output transfomer with copper foil between the primary and secondary output.

The result, it is claimed, is 600W of continuous, newly generated power.

So what's the point? Well IsoTek claims that mains electricity is distorted by various factors as it travels from power stations to be distributed throughout or homes, eroding the performance of audio and AV systems.

By building the Genesis, IsoTek claims it can produce an "extremely precise and consistent 230V/50Hz mains sine wave with vanishingly low levels of distortion, independent of the input quality of the power line".

Keith Martin, IsoTek's founder and managing director, explains: "We looked at existing regeneration systems and thought 'we can build something better'. Six years of extensive R&D later and this is the result. No other device delivers such ultra-low levels of distortion, and the resultant uplift in sound quality is remarkable: clearer, smoother and better defined, more open, dynamic and engaging."

At that price, we'd hope so.