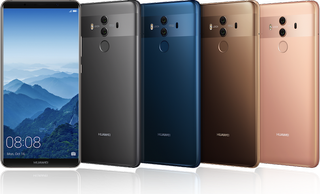 "This is not a smartphone. This is an intelligent machine". That's how Huawai is marketing its new, well, smartphone, the Mate 10 Pro (which comes alongside the standard Mate 10, although that one won't be available in the UK).

A series of leaks that took place the a few weeks before might have taken some of the wind out of the company's sails when it comes to surprising us with features and form factor, but Huawai is still hoping that the qualities of the Mate 10 Pro are enough to get people excited.

So, what's under the hood? A Huawei Kirin 970 octa-core 2,36GHz CPU, for one, paired with 6GB of RAM. This puts it in pretty close competition with the Samsung Exynos 9 Series CPU that's in the Galaxy Note 8. That all gets powered by the 4000mAh battery, which the company claims will give you one day of use for a “heavy user”, and two-days for normal users.

Huawai are pushing the AI credentials of this phone, especially regarding that Kirin 970 chipset. Calling it the world’s first “neural-network processing unit (NPU). The company is claiming this makes the phone faster at analysing “objects and scenes” in photos – able to recognise 2000 images per minute.

Pointing the camera at a model dog, for example, brings up a little dog icon in the bottom right of the camera app. The end result seems to be that pictures come out punchier and sharper than without the built-in AI processing.

It'll be running Android Oreo 8.0 (so supports split-screen viewing), with 128GB of on-board storage - but unfortunately there aren’t any external memory capabilities.

Features-wise, you unlock the Mate 10 Pro using its fingerprint scanning (which Huawai says is faster than the face-unlocking on the iPhone X). It’s also IP67 water and dust resistant, and IP53 spill and dust resistant.

The camera is a dual-lens design (one that’s 12megapixel RGB and one 20 megapixel monochrome lens) capable of going as low to f/1.6 for use in dark areas. It has face and motion detection, and depth-effects similar to the portrait mode found on Apple’s iPhones.

Unfortunately, you don’t get a headphone jack with the Mate 10 or the Mate 10 Pro; there’s only one USB-C port at the bottom, so if you want to use your own 3.5mm-jack headphones you’ll have to get an adapter. On the bright side, it will support 32bit/384kHz files so you can take your hi-res music with you.